A Fisher of Men 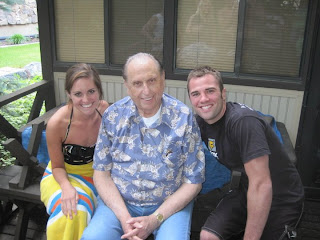 Evan and I were bored this summer and decided to float down the Provo River with a bunch of our friends. It was kind of a disaster with two dollar Walmart tubes, and ice cold water, and a few rapids that took us out. We finally made it down to Vivian Park shivering but still in one peice and decided to walk around the neighborhood a little bit while the boys went back to the top to get the cars. As we walked past one of the little cabins we saw some Suits standing outside and recognized President Monson sitting on the back porch! We were so excited and couldn't stop waving but we didn't want to mess with the body guards so we kept walking and tried to find another way out. Turns out everywhere was a dead end so we had to walk past President Monson's cabin again. All of us are in swimsuits still at this point (I've never been so grateful for one pieces in my whole life!) so as we try and sneakily get by, President Monson yells from his porch "I'm being invaded by topless men!" Haha we couldn't believe that came out of the prophet's mouth! He waved us over and we all shook his hand and then sat at his feet in awe. The rest of our group came to join us and we listened to President Monson tell fishing stories for the next hour. He told us about the history of his cabin, the biggest fish he ever caught, and threw in a few war stories for good measure. Sister Monson was waiting for him in the car so we kind of felt bad for keeping him (not until an hour has passed though!) so we kept trying to say, "President Monson, Sister Monson is waiting for you in the car, should we let you go?" He just replied "I've waited for her our whole life, she can wait a little bit longer!" He is hilarious! He then took us on a tour of his little cabin which his family has owned for several generations and proceeded to go through every single lure in his tackle box with us. I had no idea he was such an avid fisherman, but even the oven mitts were shaped like fish! He was just like a regular old Grandpa, telling stories and joking around. After we had exhausted the tackle box a half hour later he decided he had better go but I couldn't' pass up this once in a lifetime opportunity for advice. I told him Evan and I were engaged and getting married in month, I guess he gets a lot of requests because he just said "Where is the wedding?" "Texas." I responded and he just exclaimed "I can't travel that far!" I wish! But I told him all we wanted was some marriage advice and then all the sudden he got very serious. It was cool to see the difference from him reminiscing about fishing stories as a young boy to the immediate spirit that came over him when he started to talk about the gospel. You could just feel his power. He told us that his advice was that we should kneel beside our bed and pray together every single night and then give each other a hug and a kiss and tell each other we love each other. He turned to Evan and said, "Treat her like she is royal, for that's what she is," and then he looked at me and said, "Feed him on time. And feed him what he likes." And that was it! So we have been following his advice since that day and are so grateful for our amazing opportunity to spend so much time with him.

I think about that experience every time I hear his voice now, and it is such a testimony builder for me. We felt so lucky that the Prophet of God would take so much precious and I imagine highly scheduled time out of his day just to be with us. We are so excited to hear from him this coming weekend during Gereral Conference (for more info go here) and get more advice....and secretly hope our picture makes it in to one of his slide shows!
Labels: Church