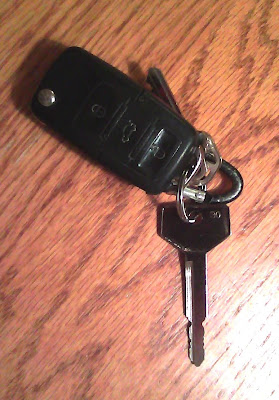 Do you see what this is?

This is my very own key to the biscuit.

Back in April when Evan and I got engaged, I gave him my spare key to the Jetta. It was all his. Kind of a big step right? He could use my car whenever he wanted to or whenever he needed it! Sort of like trading apartment keys…. except we’re Mormon so we don’t do that. But you get the picture.

So why did I not receive a key to his car at the same time? Yeah that’s what I thought….until we started looking for car insurance last week. I kept telling Evan he needed to do it and I’m sure he was wondering why I was so lazy and couldn’t help since the insurance was for BOTH of us. Well because, my dear husband, every time I called to get a quote this is how the conversation went:

Geico/State Farm/ Liberty/ etc: “ Okay just a few more questions, do you or your spouse have any accidents, traffic incidents, or speeding tickets?”

Me: “ Yes, my husband has one speeding ticket.”

BUT LET ME EXPLAIN! But for some reason they aren’t really interested in the fact that, truthfully, it was Evan’s fault I got the third ticket anyway! I couldn’t help it that he basically professed his undying love to me before I was ready. I had just stopped writing the “L” word in my letters to he-who-must-not-be-named a few months before, I couldn’t just throw that word around again like it was candy! Except that I did love Evan. And I wanted to tell him. But I didn’t. So then when I left I was mad. Like speeding-down-a-farm-road-at-20-over-the-speed-limit mad. My sweet, innocent freshman cousin was in the backseat along with my brother Zander. It was one in the morning and we were all heading back to my grandparents house and I was driving, quite unfortunately for everyone involved. My cousin finally spoke up and quietly observes that I might be going a little fast. Zander, knowing me far too well just looked at him and said “She knows, Jacob.” And not five seconds later, the lights and then the sirens. Shoot. Weird thing is, the policeman didn’t care that I was in love with my not-boyfriend either.

So I paid the speeding ticket. And thanks to growing up and getting my own car insurance, I earned the privilege of continuing to pay for those tickets. Every. Single. Month.

But I also earned my own key to the biscuit :)