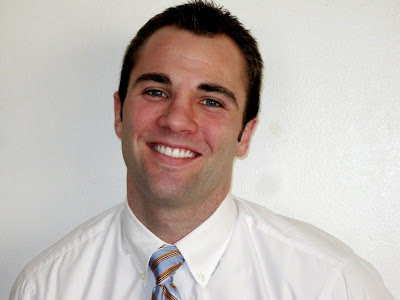 A few hours in to the conversation on our first date, Evan asked me what my secret passion was. I don't really remember what I said, but I do remember what he said. He said he loved teaching the gospel and he would love to be a seminary teacher someday as a career. I'm sure I said something appropriate and polite back, but in my head I was like "A seminary teacher? SO not going to work for me." Its okay, you can judge me.

But the problem was, I really liked him. So I had a plan. I started stongly encouraging new ideas in his head like physical therapy and I thought his seminary idea was just a phase that all new RM's go through and we could just move right past it. But after a while I started discovering that Evan's idea of being a seminary teacher wasn't really just an idea. It really was a passion and dream that he wanted more than anything in the world. So after I realized how much I liked him and that I really wanted to keep dating him, I decided I had probably better come to terms with this dream of his. I worked as an EFY counselor that summer and I sat the session director's wife down one week and told her I was dating a guy who was interested in working for the Church Educational System and how the heck was I going to deal with that?? What she said has stuck with me ever since. She told me that she couldn't have picked a better profession for her husband. That he comes home so happy every single day because he spends his time doing the most important thing in the whole world, teaching the gospel. How can you say no to that?

Naturally, it took me awhile to swallow my pride. Hello? This wasn't how I had planned my life. How were Anthropologie and J Crew going to fit into the budget of a seminary salary? There are those plans again... getting blown out of the water. But the more I thought about it, the more and more I loved the idea. Spending our entire lives in service of the Lord, being sent wherever He feels we need to be, and having a husband who gets paid to study the scriptures?

So Evan took the Introduction to Seminary Teaching class this fall and watching the way he lit up every time he told me about the class pretty much sealed the deal for me. I have always felt that it was so important for him to do something he loved. If he had to be at work all day five days a week, it had better be something he really cared about. And now I just feel so lucky to have married someone who cares so much about the gospel that that's what he picked.

How the program works is, you take the first class (Intro) in the fall of your junior year. Then you hope and pray you get invited to the second class for winter of your junior year. If they like you they keep inviting you back so senior year starts with student teaching and then finally by the time you graduate hopefully they offer you a job. Evan did get invited back for the second class this winter, but the exciting thing is that they have asked him to also begin his student teaching a semester early! He will be teaching two classes of 9th graders at Alpine Junior starting next week. It has been a whirlwind experience and an emotional rollar coaster for him but he is so excited to start the program and see where it goes from here!
Labels: Church school