The other day when Evan got home, he walked over to where I was parked studying on the couch, shook my hand, and said:

"Hi, I'm Evan. I'm your husband, you know the guy who sleeps next to you every night. But I'm the one who sleeps longer."

Okay so we've been a little busy lately! The end of school always gets kinda nuts and with our opposite schedules, carving out even a half hour for dinner has to wait until 8:30 or 9. It's been all business around here with small bursts of excitement, such as Evan taking to throwing snowballs indoors (Oh that's weird is it April where you live? Because we are apparently stuck in a perpetual state of January), or small bursts of horror such as the three dishes the we have broken all in one week. How does that happen?

We did escape our school-enduced coma's for a few minutes this week for a little seven minute date to the corner store. I know, classy joint. Don't worry we dressed the part. Evan was wearing orange and black plaid pj pants with  moccasins and I was wearing yoga pants, slippers, and a cashmere cardigan. Okay. We had a white trash moment.I'm pretty sure the Creamery technically isn't a public place though anyway. The only other humans in there are BYU freshman and they've all been trapped on campus so long they don't know the difference (No offense, Christian). The best part of it was, the girl who was at the checkout counter selling us our half gallon of Strawberry Sunday Crunch was the same girl who was there two nights ago when Evan went to pick up milk. And he was wearing the same orange and black plaid pj's then too. Haha real cool eh?

Its time for a little fun around here, so I'm taking the lead and hoping the weather gets on board. 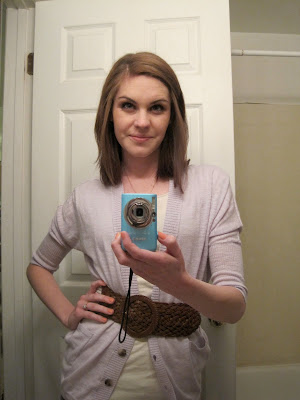 First Fun project: I cut off my hair and dyed it blond. But the blond part was an accident, don't worry, we dyed it back. (Sorry about the picture, I had to take it myself and I couldn't figure out if I was supposed to look at the camera in my hand, or the camera in the mirror, or myself in the mirror...awkward)

I know what you're thinking. Great, she's just another one of those girls who gets married and then cuts off her hair. What, you think now that you don't have to be attracting boys all the time, you can just do whatever you want? You think now that your husband is stuck with you forever anyway he'll just have to love you no matter what?

Yes that's exactly what I was thinking.

No actually I was looking through my pictures on facebook and realized that I have had the same hairstyle since 2006 and I said you know what? Its time for a little excitement. Plus it had been permanently attached in a rather unfortunate looking bun on the back of my head since I began spending so much time being a nurse that those last five inches weren't really doing anyone any good anyway. So now they're gone. 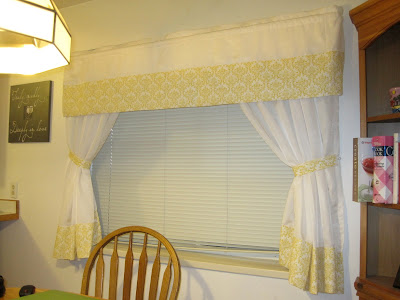 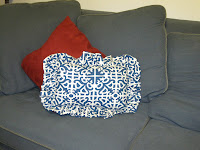 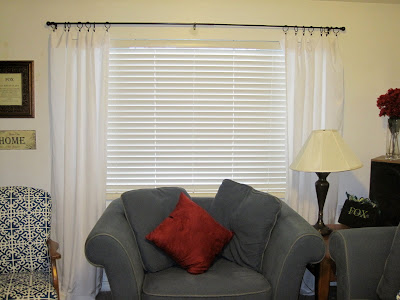 Second Fun project: I have been taking sewing lessons from the very talented Varo Hutchinson as she helps me beautify our little apartment. Both of my grandmothers are amazing seamstresses and have been trying to teach me for about ten years,  but to tell you the truth I really struggle. I have this horrible fear that my kids are going to be the losers on Halloween who had to buy their costumes from Walgreens because their mom can't sew a straight line. So we did a few projects together and I love how they turned out! Curtains for the living room, curtains for the kitchen, and recovered a little pillow for the couch (which ended up being the hardest one of all!)

AND last but most certainly not least, the third fun project I am working on is our celebration date on Wednesday after the last day of classes! Naturally, Cheesecake Factory will be involved. Just three. more. days.