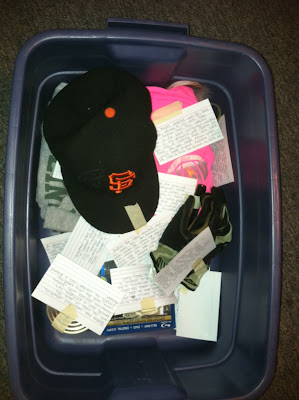 For Evan's intro class for seminary this year, he wanted a creative way for his students to learn about him without having to stand at the front of the room and bore them with a long powerpoint about himself. So instead, he had me go around the house and collect 15 objects that represented him and write little note cards attached to the object explaining how it portrayed Brother Fox. Um by the way, do this with your spouse. Hilarious. Pink short shorts? Burt's Bees? Who is this man! Anyway the kids came up to the box and took an object and then they went around the classroom and read the cards out loud and taught themselves about their teacher. And then Evan made this super spiritual analogy about how they are going to teach themselves about Christ by going into the scriptures and picking out symbols in the Old Testament like the things in his box... so clever! I was impressed. But ANYWAY one of the objects I put in Evan's box was a pair of biking gloves. As you may have noticed from his recent facebook GPS posts, this is his favorite hobby and pastime. He always said when we got married he really wanted me to come with him, so biking could be "our" thing.

Well let me tell you my history with biking.

After training for a triathlon I started to get interested and began with Gold's cycling classes. Months later, easy. The hardest part was beating out the other gym rats to a bike. But after I mastered it (the biking, that is) I still wasn't quite ready to invest in a bike of my own. That's serious business. So I figured my next step was just the click-in shoes. My Hotter-than-Hell racing Tour-de-France TiVo-ing dad bought me these super nice cycling shoes and wrapped them up and gave them to me for Christmas that year and I was SO excited.

But that's when the trauma started.

I borrowed a bike and on my very first ride with click in shoes, not only did I fall over while still attatched to the bike three different times, but I also managed to somehow pull my foot off the pedal while the bottom of the click in shoe stayed on it. As in I ripped the shoe in half. How does that happen??

So it was back to the cycling room for me. Perhaps the shoes plus the real road bike all at once was too big of a jump. I'll just wear my click in shoes on a stationary bike right?

One January evening after a long day at the hospital I decided to head to a cycling class with my new shoes to burn off some frustration. I was feeling pretty cool because none of the other people in the class had click-in shoes. Just dumb Nikes. I was legit.

So we get going and girlfriend at the front who is having us bike to Katy Perry tunes decides we need to start doing some "tricks"to help us get a better work out. First we do "jumps," basically just stand up and sit down while pedaling to the beat of the music. Fine. But next she wants our arms in the air. Now, by this point in my biking career I'm discovering that I don't have the greatest balance, so I'm a little nervous but I figure my shoes are attached and I'm stationary, how bad could it be?

I start waving my arms in the air like the rest of the class. Then she wants us to do the arm movements combined with alternating our weight between our left leg and our right leg. Well that proved to be too much for me because the second I put my weight on the right side synchronized with the right arm flex, my bike started to lean. Crap! I hurry and try to put my feet on the ground to catch my balance... oh wait no I don't. My feet are connected to the pedals. So actually they don't move at all. Instead I go down still attached to the bike and crash on to the classroom floor with the bike on top of me. Desperately trying to minimize the damage as I picture the domino effect to the row of bikes I may have just caused, I think to myself "Maybe I can just get up real quick so no one notices?" But my feet won't come off the stupid thing! So here I am laying on the ground in the middle of a cycling class full of people, laying underneath a stationary bike and frantically kicking myself away from these pedals while managing instead only to flop around in rather awkward looking circles. Finally some blessed soul felt bad enough to dismount their own bike and hoist me off the floor. Again, still connected to that blasted thing.

Yeah, my cycling career is over. Sorry Lance. 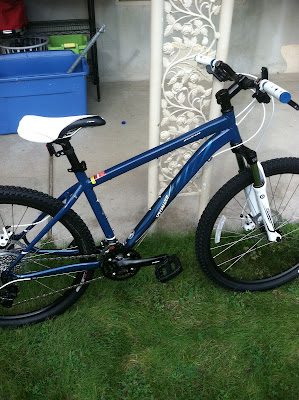 There is one very important difference. My husband is a mountain biker. You don't have to wear click-in shoes when you mountain bike! You can of course, but you won't be scorned from the biking community if you don't. Unlike road biking. So this wonderful holiday weekend, Bingham Cyclery, Evan's shop of choice, was having a Labor Day sale to clear out last years inventory. And after a small debate, he surprised me with this beauty! We have been mountain biking together a couple of times before, but I don't own a bike (understandably) so we were never able to make it "our" thing. I am so excited to get to join him now in his favorite pastime! Wish me luck, lessons start tomorrow and I can only pray it goes better than my past experiences.