The Nursery- Come on in!

It took months of searching to find a nursery idea that I liked. I was anti pastel/"baby" colors because for some reason I was sure they would turn my little boy into a sissy and, well, we just can't have that.

I finally found this nursery and it had the basic elements I was looking for: the striped curtains, the initial over the crib, the mobile in the corner, the pendent banner, all things I knew I wanted. 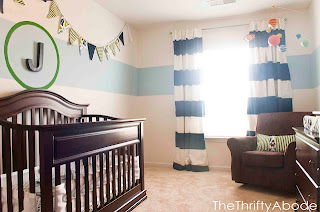 So we used it as a starting point and here's how ours turned out:
Come on in! 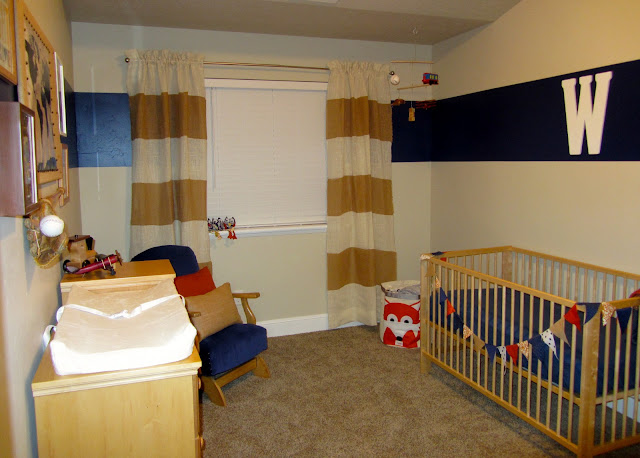 I decided to go with a vintage toy theme. Almost all the toys came from either my Mom or Grandmas' old toy closets, DI (a thrift store), or garage sales. The planes, I confess, came from Hobby Lobby. I couldn't find them anywhere and when I finally did it was only on etsy for astronomical prices. So, they're not real vintage. He'll never know! But you take in a 40% off coupon and they might as well be garage sale price! Can't beat that.

Tutorial for the burlap curtains here. I did mine slightly differently but seriously they are the easiest curtains ever. Why can't everything be made out of burlap. 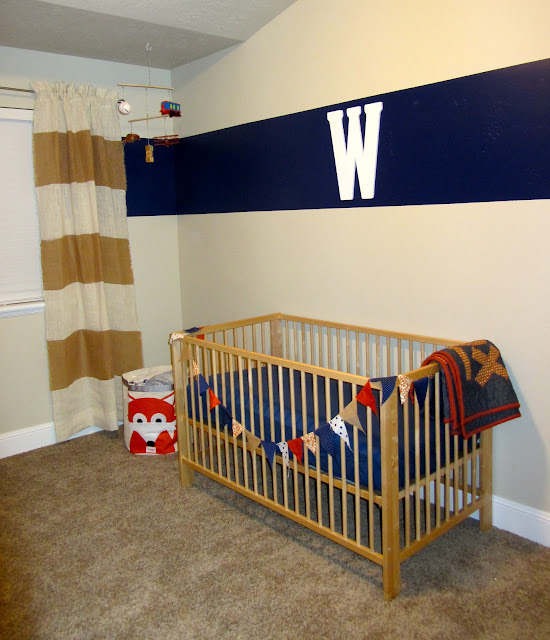 The crib is from Ikea. I thought CPS might come get us if we bought a used crib because I feel like  the safety requirements for cribs change every five minutes and anything we found used would already be outdated. So Evan surprised me with this one and its exactly what I wanted!

The "W"...... Well lets just hope he looks like a "Winston" because its my favorite name! Another 40% off Hobby Lobby item. There is also a great website to buy wooden letters from called craftcuts.com where I almost bought it because you can pick any font and it comes already painted any color you want but they were 4x the price. Maybe next time. 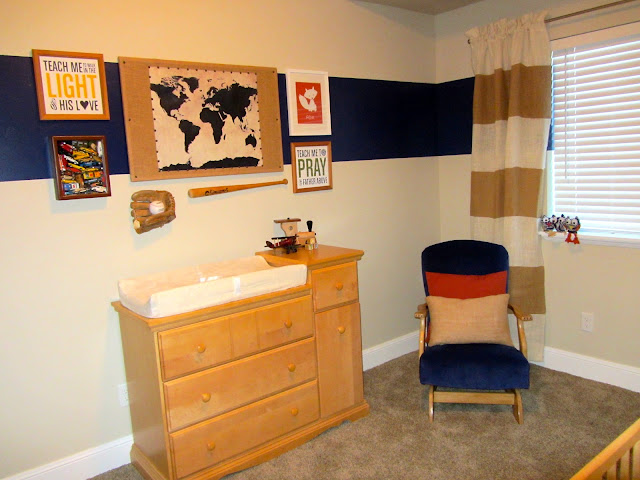 Found that dresser on KSL for a steal and it is in great condition. Have I mentioned that I love KSL?? 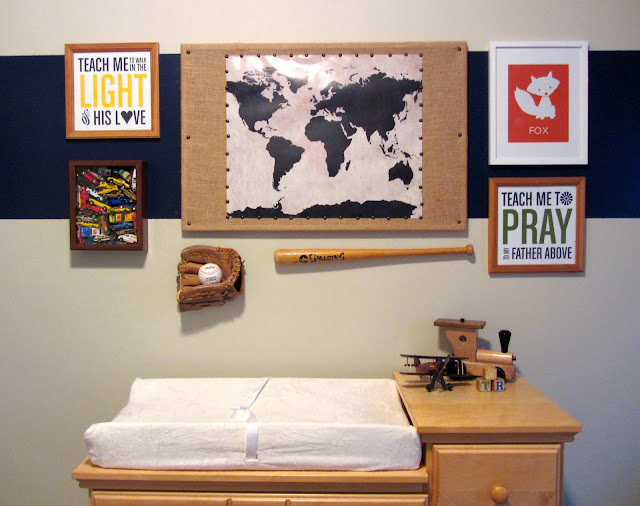 Everyone has asked me about the map. What does it mean? I don't really know. When I started looking for old toys, so many of them were planes, train, cars, so it just seemed to go with the theme. I also saw a world map on Pinterest that I loved with the phrase "I hope they call me on a mission" printed over it. Maybe I'll add that when he's a little older. Mostly I just want him to know there is a big world out there and I want him to see it and experience it and be anything he wants to be. Hence, the map. I found it on Zazzle.com by the way, they have tons to choose from. I just bought a poster instead of a real map and then attached it to an old bulletin board I found in our basement that I covered in burlap using upholstery nails. 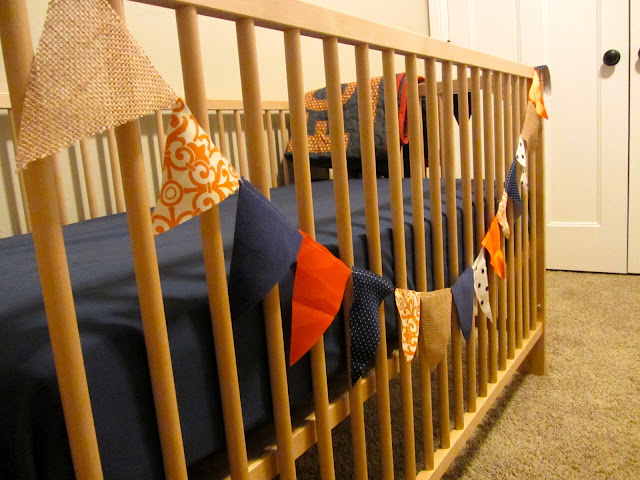 The banner is made from fabric scraps from all the other projects as well as whatever was in Grandma Hutch's scraps closet that fit the color palette. Such a great resource. I do realize it can't be on there when he sleeps in the crib (SIDS police) but he's going to be an a cradle next to my bed for the first few months anyway so for now it stays. 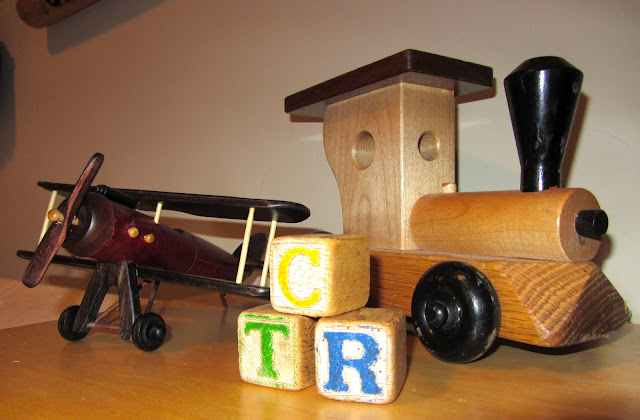 The blocks were my dad's when he was a little boy. Love it! 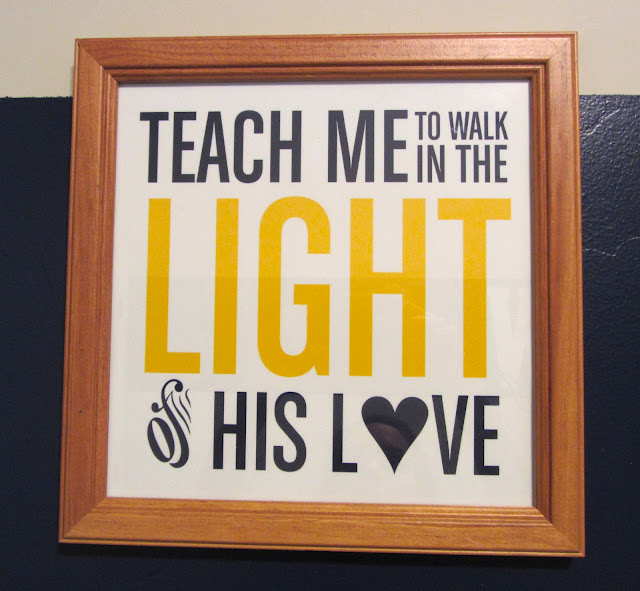 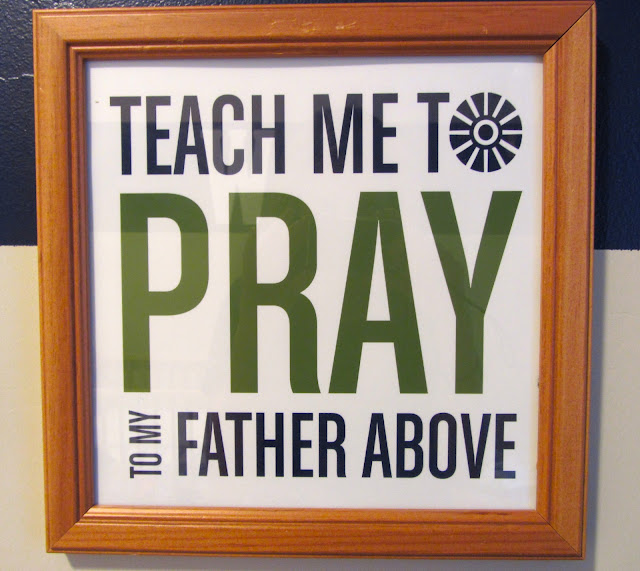 Told you this primary song was going in the nursery. Just a little reminder to me while I'm feeding him at 4 in the morning that he is a gift from God and its my job to teach him about Christ. Huge thank you to Missy Saunders for designing these beauties for me!
PS Go check out her website. She's incredible. 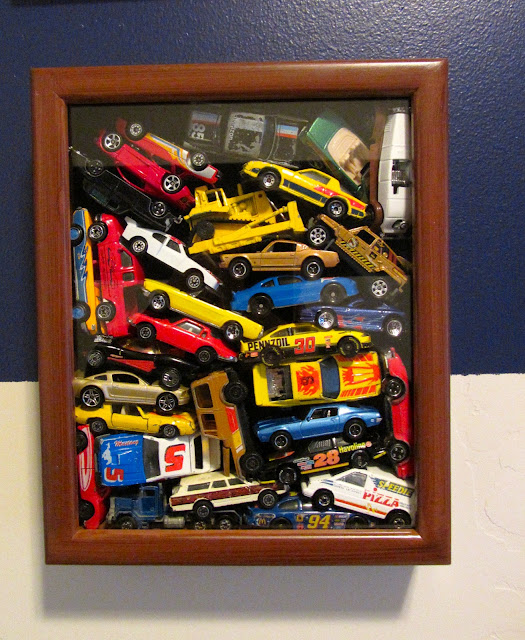 My brothers' old toy cars. Thanks for sharing! Your nephew appreciates it :) Look at the treasures in here: The pizza delivery truck, the station wagon, the tractor! I can't get enough. My dad thought this was a very lame project because now the toys are in a frame and baby boy can't play with them. Don't worry Dad, I didn't glue them in so we can take it down and open it up whenever he's ready. 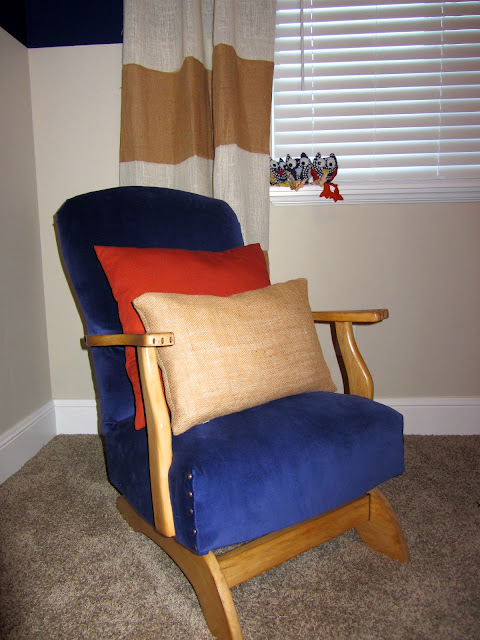 This was a rather large project {read: lots of work} A new rocker/glider was not in the budget, but I have been lucky enough to inherit this rocking chair from my Great Grandmother Jane. It was a victim of our flood last year so we had to refinish it (thankyou to my handy man husband) and reupholster it  (which Grandma Hutch taught me how to do!). I love how it turned out and that it has so much sentimental value! Our little one will make four generations of babies rocked to sleep in this cozy thing.

I'm going to paint baby's birth date on the burlap pillow after he is born... but considering we have no idea when he is coming just imagine it looks something like this ---> 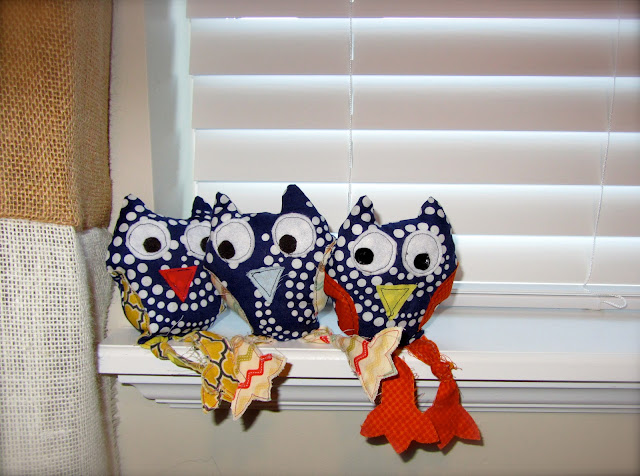 The owls: Little cuties from the baby shower....couldn't leave them out! 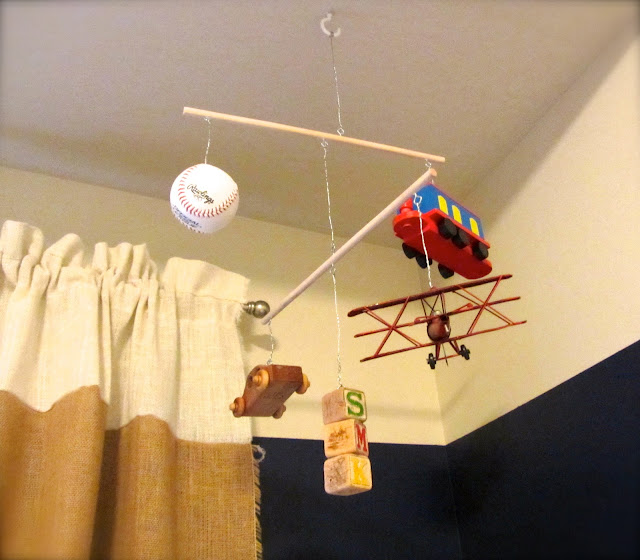 The mobile. This project was a PAIN to figure out and Evan almost took it away from me multiple times when I got too frustrated but it is now finished and hanging on the ceiling and I am pleased as punch with what it adds to the nursery. I love mobiles and I originally thought I might be able to buy a kit at a craft store or something to make one. Not so, they only sell the solar system that way. The ones I found to purchase were at least $40 and they were little felt shapes hanging from fishing line. I thought that was lame. $40 for felt?? No thanks. So I decided to use some of the toys I had collected and make up my own way to do it. I bought a wooden dowel from Walmart for $0.50 and a picture hanging kit for $1.50 and we were in business! The worst part was getting it to balance...physics. Yuck. 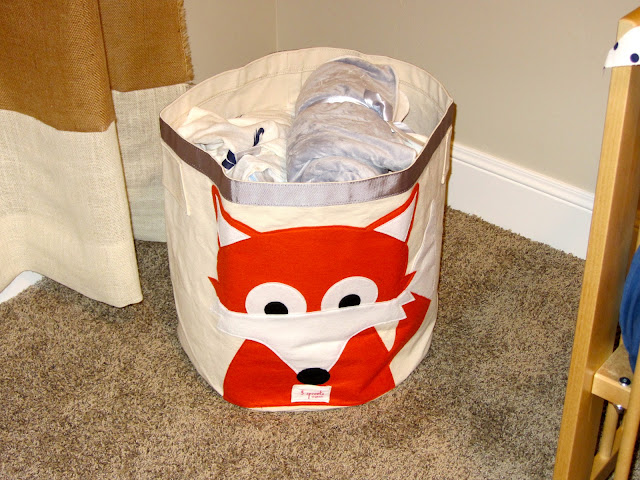 Little Fox hamper: My mom stumbled accross this adorable thing somewhere like TJMaxx I think? One day it'll be full of toys but for now its got every cozy little blanket he could ever possibly want. 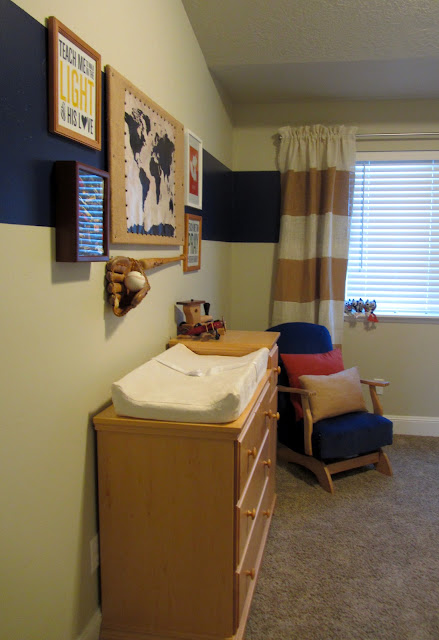 So that's it! Hope you enjoyed your tour :) He's got a closet full of the cutest clothes which I considered including in the pictures, but the closet is also full of other not-so-photogenic items such as a breast pump so lets just keep those door shut shall we?

Creating his nursery has been OH SO MUCH FUN but I have to admit I am relieved it is finished and ready for him to arrive. See you in six weeks Baby Fox!