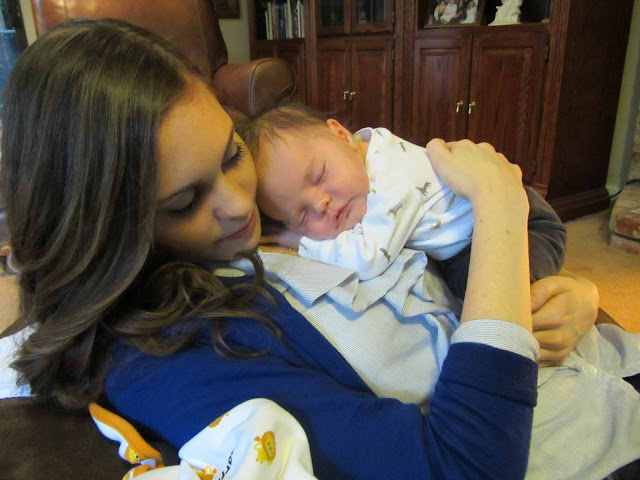 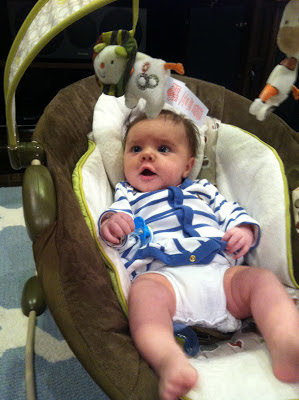 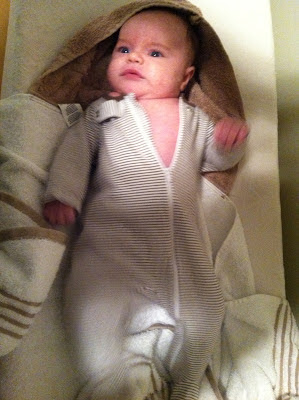 I fall more and more in love with this little face every day! This month Winston met a whole lot of new friends starting with all of his Fox family in California followed by our trip to Texas. He did better with sleeping as long as he used the carseat but lots of nights he still ended up snuggling with me. Let's be honest if I had a choice between a queen sized bed with down pillows and comforters or a car seat I'd make my mom scoot over too. We worked on finding a schedule this month but it was pretty tricky considering our surroundings not to mention time zones were constantly changing. He's still a champion eater as evidenced by him busting out of those size 3 month pj's I tried to dress him in the other night! We both got better at the whole feeding circus and even braved doing it in public a couple times...discreetly we hoped... but considering it was in a park in San Fran I'm sure no one would have thought anything of it either way. We got real smiles and lots of talking out of him which we couldn't be more thrilled about. He's started reaching for toys too, but I think its mostly on accident. His favorite accomplishment is that he's discovered how to splash, we have to refill his tub at least three times before we can stand to take him out of the water but its pretty hilarious to watch him try and do the backstroke. Maybe he'll be a swimmer and make his Papa proud! My body finally started working properly again at exactly the magical six week mark, my clothes fit, and I'm released to exercise. Praise heaven! 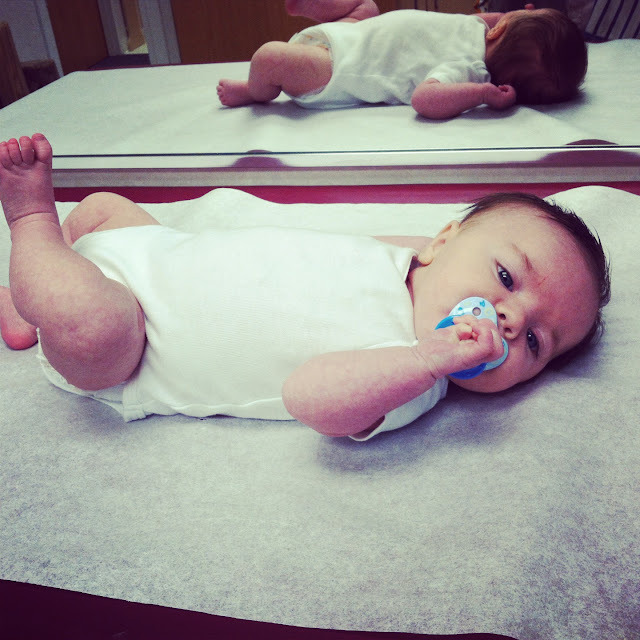 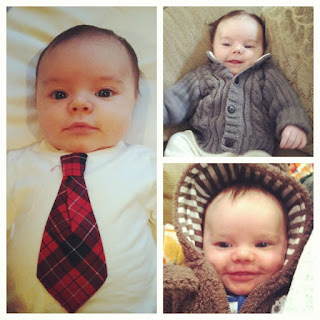 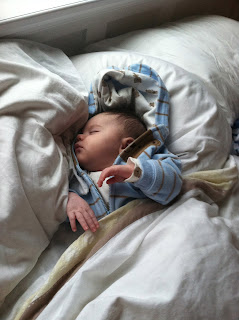 Favorite things:
1. Pacifier wipes- These were a life saver since we were traveling so much. Finding your baby's pacifier in his one year old cousin's mouth, on the gas station floor, on the airport security belt? Probably ought to throw that bink in the dishwasher...or the trash... but these will do in a pinch! Thanks Linley! 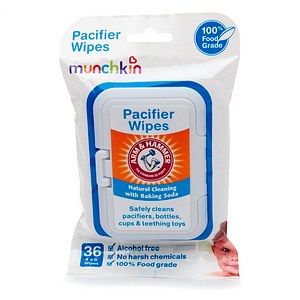 2. Baby bunting- Winston is a squirmy little boy, he never stops kicking his legs. He would always get so mad in the middle of the night when he kicked his blankets off fort he millionth time and woke up cold. I started having him sleep in this fleece baby bunting and it was the first time he ever slept through the whole night! Plus he looks like a teddybear and I seriously can't stand how cute it is. Thanks Cheyenne and Chris! 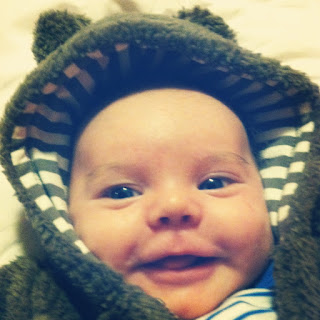 3. Play mat- My mom bought this cutest toy for Winston to play with while we were in Texas and he loved it. He would just stare and talk and laugh like it was the greatest thing! 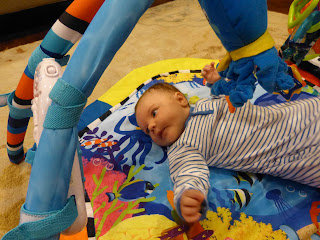 4. Bath towels- This is more of an un-favorite thing. I bought some baby bath towels with a Target gift card we got because they were adorable and soft, but they are the dumbest thing I have purchased. They are so thin its literally like drying him off with a paper towel and then he's not only ticked that I took him out of the water but now he's ticked that he's freezing cold! My sister-in-law  made a hooded bath towel for him out of a normal towel and a hand towel and it is the only one we use now. Come on Target, babies got to keep warm too. Thanks Amy :)

" It's too bad his middle name isn't Thomas or something. Then we could call him WTF."
{Yes, that's a tragedy.} 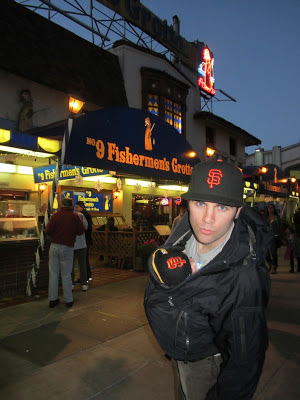 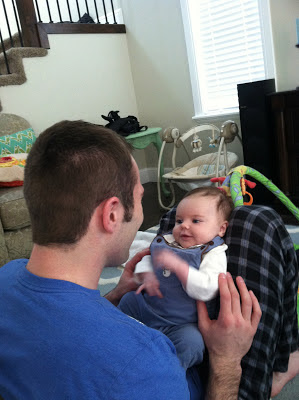 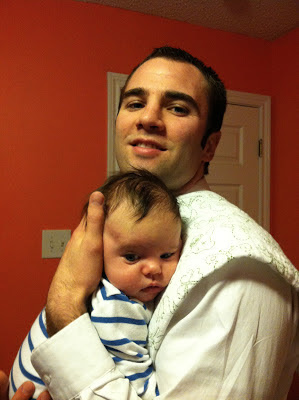 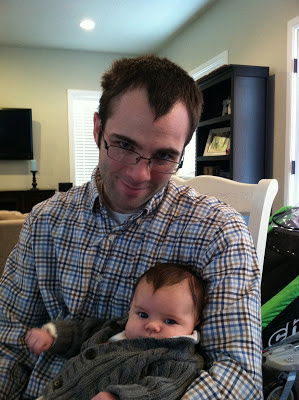 
{Tanner- in his normal deep voice as if he were talking to an adult}
" Hey Winston. Whats up."
{Whine}
"You want this?"
{Gives Winston the pacifier, Winston immediately spits it out}
"Nah. You're not about that life."

We were planning on heading to California on Saturday but a huge snow storm was rolling in and if we waited for it to pass we would be stuck in Utah until Christmas Eve. Last minute we decided to jet out two days early which meant I was not really prepared for how I was going to feed Winston during the 10 hour drive... I fed him, stuck him in his car seat and we were off. However, a few hours down the road I realized I was in trouble. Finally I told Evan to pull off at a gas station and I would pump real quick and then feed him a bottle while we kept driving. How many times have you been at a gas station bathroom that's really some one room shack around the back of the building that hasn't seen any Lysol since 1995? Well that's what I was hoping for so I could pump in private, considering its even more awkward than breastfeeding if you can imagine that. But of course the one gas station we go to has to be all high and mighty and have a bathroom that belongs in Nordstrom but with only one outlet to plug my pump in to.. right between the sinks and the paper towel dispenser. Cool. Well...the things you do for a crying baby... I went ahead and plugged that puppy in, I mean really how many people will have to pee at this exact time at this exact gas station I thought? Turns out all of northern Nevada had to pee at that exact time at that exact gas station. Also turns out my pump decided to bust while one of them was washing her hands and it started spraying milk everywhere. It was the first time I ever experienced that feeling of wishing I could completely melt into the floor. Plus I was pissed because I needed that milk!

To the New Mom in the Camry:
Seriously?
A bottle of formula never killed anyone.
Sincerely,
The disgusted citizens of Winnemucca

Needless to say, we'll be skipping that pit stop on our future drives. 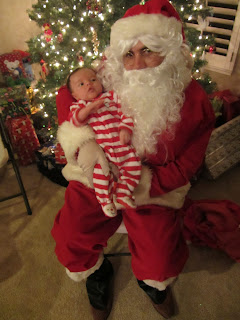 Couldn't be worse than the car ride right? Winston actually did great, he never cried, just talked and slept through the whole thing. Something funky must have been going between his bodily fluids and the changing pressures though because he managed to "soil" my clothes, his Dad's clothes, and two sets of his own clothes all in four separate episodes during the flight. Maybe we'll hold off on traveling again for a while.