I meant to post this Thursday but... I'm working on our tax returns and somehow decided to prioritize them over this blog. Weird. 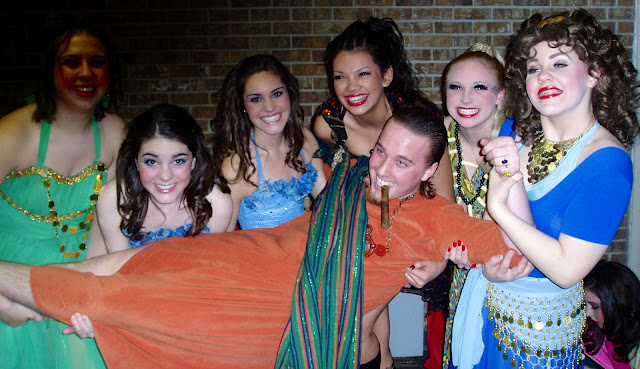 My senior year of high school, for obvious reasons, I found myself spending a whole lot of weekends at home with my Mom. Not that there was anything wrong with this of course, I love my mom. She's the best, and we had a lot of fun. But spending my nights camped out on the couch catching up with Rory and Lorelei wasn't exactly the party any eighteen year old girl imagines during what everyone insisted was "the best year of our lives." Praise heaven they were wrong about that at least. So after the Friday Night Lights went out for the last time that season I knew I was going to have to find something to fill my time... after all BYU wasn't letting me come until June no matter how many bags I had packed. 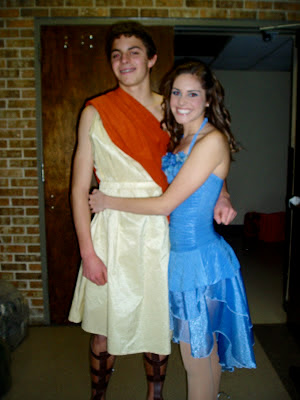 My extremely charismatic little brother and a few other friends were trying out for the school musical later that month. I had never been in a school play. I do not sing. In fact whichever of my college roommates ended up sitting next to me in church used to laugh at my attempts to sing hymns. I do not act. I do not speak with any cool accents  or do funny impressions. I don't crave spotlight. I don't even dance really. Those cheerleading moves were all the result of hours of practice and private lessons. And if we are honest about it, they still looked kinda awkward. But I was desperate. I mean earning more chords for graduation was cool and all...but you can only study calculus and the French Revolution for so long.

So I tried out.

I got up on the stage in front of who knows how many people and sang "I'm gonna wash that man right out of my hair" from South Pacific. Solo. Ha! I sure wish I had a recording of that. The director must have known I wasn't getting invited to any weekend parties because I can't think of any other reason that I got a call back. But I did. The kind of call back where you have to sing a solo again, a sight reading solo. Now, the song from South Pacific was a very strategic pick on my part, I sang a clip with very few notes that were right in the easiest range for me and practiced it about a billion times so it sounded like I could hold a tune. Sight reading is an entirely different ball game. Luckily I did well enough the first time around to earn a part, but poorly enough the second time around to earn a part with absolutely no lines, just a brief dance duet and a bunch of cameos. Stand here and look pretty type stuff. Perfect! We were doing the play "A Funny Thing Happened on the Way to the Forum" and I was a courtesan {definition: high class prostitute}, part of the "Gemini" pair. Two for one special, kinky! Good thing I was too naive at the time to realize much about this role, otherwise I probably would have turned it down out of mortal embarrassment and missed out on all the fun. Besides we were doing the high school edited version of the play :) Practice was nearly every day after school for months. I was 100% out of my element and 100% in heaven from the moment it started until the very end of the whole sha-bang.

So what's the point of this post? Well, I got a request from one of my friends to write a blog post about "a pivotal moment in my life, my pre-Winston, pre- Evan life". What, are y'all tired of the mamarazzi posts already? Anyway, this experience was the first thing that came to mind.

I really was just looking for a distraction until I could get away to college, I didn't go in the that auditorium on audition day thinking it was going to be some huge life changing event, but that's exactly what it turned out to be. I had lived in the same house from the time I was three and the same ward from the time I was one. I had the same friends from kindergarten until my senior year of high school. I started cheeleading when I was nine years old and just kept going. Life had previously been totally predicable and very comfortable. All the sudden I stepped outside that self-created bubble and life became so uncomfortable and so much more exciting. I met so many new people. I could have conversations with people who were interested in things I'd previously given little to no thought to...like space ships or JFK conspiracy theories. I realized I could do a lot more than I had given myself credit for.

I recently stumbled across this quote and felt the truth of it:


"Opportunity is missed by people because it is dressed in overalls and looks like work."
Thomas Edison
Except in my case, it was dressed in a bedazzled blue swimsuit and looked like utter humiliation. And I am so glad I took the opportunity because it gave me the courage to keep taking them, from Olympic triathlons to floral arranging classes. And currently my opportunity is dressed in a three-day-old-hair messy bun and smells like sour milk. I'm still scared and uncomfortable, that part never goes away. I secretly have to psych myself up to go to play groups. I don't want the other moms to figure out I have no idea what I'm doing! But I fake like I'm brave. And I'm going to keep taking opportunities no matter what they're wearing because they are such a blessing.