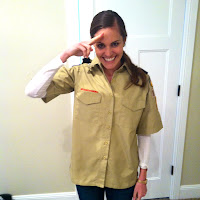 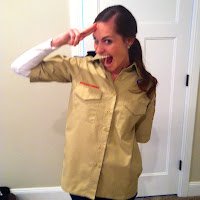 This is my reality Tuesday afternoons.
I actually have no idea if I'm doing that right.
I was asking Evan how to salute and he just laughed and laughed and took pictures.

My new ward calling: Wolf Den Leader
I actually thought they were teasing when they asked me if I would be the new den leader...
but then I realized they probably don't know me well enough yet to recognize how funny this is.
My family, on the other hand, is taking full advantage of it.
"Wolfs" are 8-9 year old boys in Cub scouts
(which means the boys I taught in primary last year will all be joining me soon! yay!)
and we are about to earn some serious knot-tying, camp-fire making, pine wood derby racing badges baby.

Lucky for them, my paternal grandmother and one of my heroes has a Silver Beaver
Translation: the highest award leaders can get in Boyscouts.
I guess you earn that after raising seven boys.
I pictured her face in my mind as I said "Yes, I would love to."
I'm currently attempting to drain her of every sewing/upholstering/budget keeping/scrabble dominating thing she knows so why not add scouting to the list as well.

The Silver Beaver means that Grandma Hutch was an incredible scout leader...
something I will need to learn to be.
But she wasn't always that way.
See, my Grandma Hutch is very even tempered.
I've only seen her upset about 3 times in my 24 years and most of those would really be better categorized as "mildly irritated"
Like when my cousins and I  decided to have a marker fight in the new pj's she had just made us.
Or like the time my then Aunt got mad and threw her wedding ring on the lawn and we all had to spend the next few hours on a "treasure hunt" to find it.
Legitimate reasons to be less than pleased right?

But my very favorite story of her losing her temper involves the cub scouts in the earlier days of her scouting career.

Grandma was the leader of a den of boys (duh) and they had spent the week collecting cans and bottles.
They were going to take them to a recycling center and turn them in for money.
The boys were being particularly loud and rambunctious that day
and giving her quite a headache as boys sometimes do.
Plus several of them were her own children so that didn't help their case.
They were all in the back of her station wagon in a very confined space of total chaos.
In her irritation and haste to get the activity over with she statrted up the car and backed out of the garage and

slammed right into the side of my grandpa's company truck.

That will make a bad day worse.
I probably would have burst into tears at that point.
You know what Grandma Hutch did?

smashed into that damn truck again just for good measure.
HA!
Might as well make it worth it right?

Then she got out of the car and went to her room and Grandpa informed the boys that "Cub scouts is over for today" and sent them home.

I'm thinking the Silver Beaver people probably don't know that story.
Love that lady.
Well she improved from there
and there are only about one million other stories of wonderful things she did with the scouts.
But those would be boring so I told you this one instead.
Plus it makes me feel like I might amount to something one day. If she started there and ended up with a Silver Beaver, maybe I can start by not even knowing how to salute and end up with  a successful scout or two.

And don't worry momma's of my wolves,
I won't be backing into anything with your precious cargo in tow.
However I am ready for some fun adventures and hopefully I can follow in Grandma Hutch's footsteps and be a great leader.