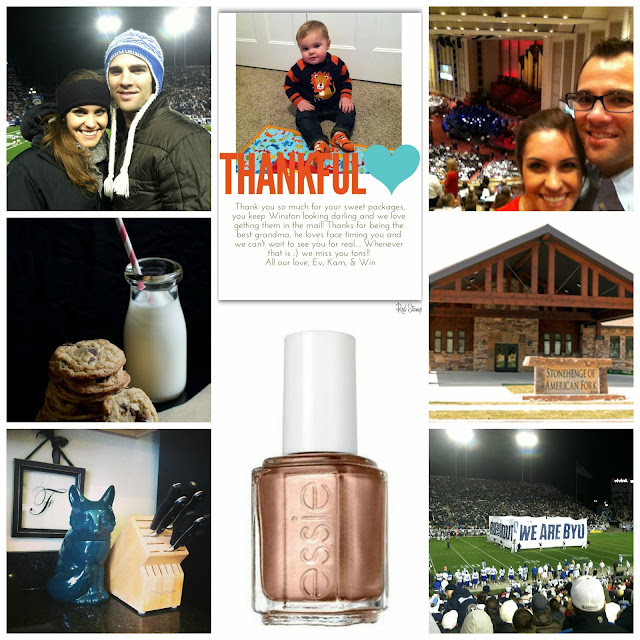 Red Stamp App: I am obsessed with this app. I have always been a big fan of thank-you notes and have attempted to be good at writing them, but my struggle usually came when it was time to mail them. I didn't have any stamps, or couldn't find the right address, or I lost the note before it ever made it out to the mailbox...mess. When we were cleaning out our apartment after The Flood I found a huge stack of wedding thank you's that were written, stamped, and addressed but never sent! What the... My apologies and extreme gratitude to those of you who lost your thank-you in our flood. Anyway this is an app that lets you send digital cards {birthday, holiday, thank-you's, anything} right from your phone. Miss Manners would probably tell me that a hand written note is better but... I'd tell Miss Manners that this has had a much better success rate in my experience.

Date Nights: Until this month, we've only left Winston with a babysitter for a date sporadically but.... let's be honest, I need dates. Maybe that makes me a needy wife. So be it. There are things I can fake. I can rearrange my furniture and flip my bed spread over instead of doing a real room makeover. But faking date nights after Win is in bed every single week doesn't work for me. I believe Evan caught on because all the sudden he had fun things planned for three weeks in a row... smart little husband. {a couple of our adventures: a James Taylor concert with Motab, and a BYU game}

Penny Talk by Essie: Somehow I haven't painted my nails since Winston was born...weird. I treated myself to this little splurge and deemed it the perfect color for my re-entry to the cosmetic world.

My new job: I loved working for Applegate, they were such an awesome company and it was a fascinating job really, but after having Winston, the hours just didn't work as well as I had hoped. Lots of weekends I would end up commuting for an hour and a half to get paid for a 15 minute visit. Not financially beneficial if you do the math. There is a great rehab facility close to our home that I wanted to work at instead but I didn't know if they were hiring, so I took in my resume on a whim, and at the same time I also requested a transfer to the American Fork office for Applegate. Well they both hired me immediately. I was not expecting that at all considering last time I was applying for jobs it took me around 50 tries to even get an interview. Hurray for not being a "new" nurse! Anyway, I tried two timing it for a couple of weeks and nearly lost my mind so I knew my time with Applegate had to come to an end. I was dreading the conversation I was going to have with them, I haven't felt that awkward since I had to break up with a boy in college. I just squirmed thinking about it! But in the end you can't say no to someone else that wants to pay you 6x more. So Stonehenge it is! I am just working PRN, mostly nights and possibly weekends or an occasional afternoon shift. I have done three training shifts so far, all at night, and have surprisingly lived to tell about it. I'm excited for the change and the learning opportunities.... as well as the option so pick all my own hours :)

The fox trend: I plan to take full advantage of all things Fox while it is trendy. How could I say no to this? I couldn't. And I didn't.

Chocolate chip cookies: When Richard was diagnosed with cancer, he adopted what we lovingly refer to as the "twigs and berries diet" ( by the way, his October scans looked awesome, no growth since July, and further treatment/chemo is postponed until January!) and we have slowly picked up some of his habits, like switching to almond milk, drinking green smoothies for breakfast, adding in tons more fruits and veggies throughout the day, and making homemade "real" foods rather than buying processed things as much as possible. One change I am experimenting with is using coconut oil and eliminating evil death causing but seriously delicious Crisco. I love dessert and eat it in some form or another 6 nights out of 7. Or 7 nights out of 7. So... I refuse to give that up. BUT I thought maybe if I didn't have to compromise taste, I could at least lesson the damage I am doing. I found this recipe for chocolate chip cookies which uses coconut oil and whole wheat flour and it is... actually incredible and I don't miss my Crisco recipe for even one second. Try it.