A picture worth 490 words 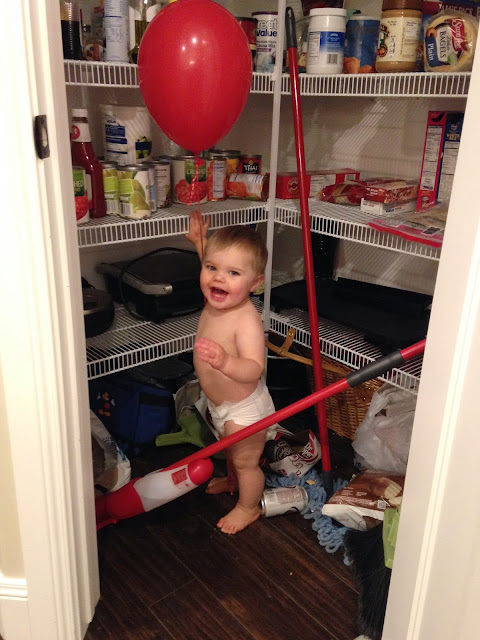 1. He's naked. Recently Winston has decided clothes just aren't really for him. It literally is a full on wrestling match to get shoes and socks on him every time we leave the house. Sometimes its not worth the tantrum and I let him walk around in a diaper. He looks like a hooligan at Costco in bare feet and 30 degree weather (I do insist on clothes at that point...) but if you saw the sock pile in the backseat of the Jetta you would understand.

2. The balloon. We celebrated out cutest cousin Thomas' 2nd birthday last week and he gave Winston a balloon to take home. It has entertained him for seven days straight. I tied it to his ankle and its pretty funny to see him realize its following him around the house and try and pull it off.

3. The pantry. I haven't fully baby proofed my house yet. I have locks on a couple of the cabinets but it hasn't been too bad up until this point. Today my house looked like a bomb went off. It definitly increased my resolve to get going on it, but for today I just didn't care because he has an ear infection and had been crying all day long. If emptying my tupperware and pulling things off the shelves makes him smile then so be it. I'll pick it up after bedtime.

4.The brooms. He has a serious obsession with the brooms and mop. You can see a little of our hardwood floor in the picture which is oh so beautiful and oh such a pain to keep clean. It probably needs to be mopped every three days and I get around to it every fourteen.  I can't do it when Winston is awake because he follows me around and eats the dirt piles when I sweep, and he sits down in front of the mop where I'm trying to clean. Try to avert your eyes when you come to visit, nap time is only so long people!

5. The smile. Like I said, it was a rough day with an ear infection. I had sent him with Evan to the doctor while I was at cub scouts, but the antibiotic, which I really don't want to give him anyway, wasn't ready yet. In the meantime I decided to try some lavender oil from doTERRA. Not sure whats in that stuff but the moment I rubbed it on his ears he started running around the house laughing. He grabbed a t-shirt and put it on his head and ran into a wall. Then he did a somersault (clearly on accident). Then he thought that was a pretty neat trick and kept trying to do it over and over. I just sat down and let him run wild because it was so wonderful to have my happy baby back again. Expect an order from me soon, essential oils.