Every day I feel like more and more of my time is spent saying things like "Sit down Winston, you're going to fall." or "No that's yucky, we don't eat it. Blech." or "Put the DVDs back in the drawer please, they're not to stand on. Thank you." and most especially, "No Winston, we don't hit, we give loves. Can you say sorry and give so-and-so loves?" I've spent lot's of time observing the great {and occasionally not so great} parenting examples around me, I have some best selling parenting books waiting for me on my bookshelf, and I've been pinning articles on Pinerest with titles like "Toddler Discipline Tips and Tricks." As Winston approaches an age where he is understanding more and slowly learning right from wrong, I'm starting to feel the pressure of finding my own mothering style. Recently though, as I've considered implementing the techniques I've read about, I've been drawn to something my BYU Human Development professor taught me way back in 2007.

We spent the semester studying how children develop and learn, and memorizing and applying the theories of famous philosophers like Freud, Erickson, and Piaget. I loved the class, I found it absolutely fascinating and actually read that text book word for word, but seven years later {seven?! I'm old} I only remember one lecture in detail. Near the end of the semester, after we had studied all different stages of development, and different parenting styles and techniques, and how they influence different children, he said something to the effect of this:

There are lots of parenting books out there, and some of them have really good ideas in them and some of them have really bad ideas in them. And more and more of them will continue to come out as the years go by. But you don't need any of those. You already have the ultimate parenting guide. It is the scriptures. You have the ultimate parenting example, your Heavenly Father. Study His scriptures and pay close attention to how God parents us, his children. Then follow his example. That's all you need.

In case you were wondering, it is a lot faster and easier to just read Love and Logic {which, by the way, does have some good ideas in it} rather than the entire Bible, Book of Mormon, and Doctrine and Covenants. It's good, but the scriptures are better. In the most recent General Conference, Elder Nelson said:

"The scriptures provide one of the best ways to find our course and stay on it. Scriptural knowledge also provides precious protection. For example, throughout history, infections like “childbirth fever” claimed the lives of many innocent mothers and babies. Yet the Old Testament had the correct principles for the handling of infected patients, written more than 3,000 years ago! Many people perished because man’s quest for knowledge had failed to heed the word of the Lord!"

If God included medical information in the scriptures, I know he included parenting help and I certainly don't want to fail at parenting because I was too busy looking elsewhere. So, I've decided before I adopt any of the parenting strategies I read about in the books of the world, I'm going to make sure they line up with the principles I find in the scriptures first. This is a lifetime study project for me as I am just getting started raising my family, but I wanted to record a few principles I've used from the ultimate parenting guide so far so I can remember them in the future:

This principle is all over the scriptures, but the verse that stuck out in my mind was 1 Kings 19:11-12:


And after the earthquake a fire; but the Lord was not in the fire: and after the fire a still small voice."

God speaks to us through the holy ghost, no matter what he has to say. Sometimes we feel a warm envelopment of His love when we have been able to serve one of his children. Sometimes we feel consumed with guilt because we need to repent. But no matter God's message to us, he uses the still small voice. As a parent, some things you have to say are compliments, small talk, informational exchanges, or expressions of love. These make it easy to keep your voice soft. But some things you need to say as a parent are warnings, corrections, and disciplinary enforcements. These make it easy to want to raise your voice. President David O McKay reminded us:

Speak softly. There are other ways to get your point across when your message is less than comfortable, but yelling shouldn't be one of them.

2. Sometimes, they have to learn the hard way.

This one comes from the Doctrine and Covenants. Joseph Smith was translating the Book of Mormon with Martin Harris who kept asking Joseph if he could take home some of the pages of the manuscript to show his wife. Joseph prayed and asked the Lord if this would be okay. The Lord said no. Martin continued to pester Joseph, so Joseph asked again. Again, the Lord said no. Martin couldn't let it go, so Joseph asked a third time. The Lord reluctantly agreed to a very specific and detailed process in which Martin could take a small potion of the manuscript and show it to only a few per-authorized people. Guess what happened? The covenant was broken and the portion of the manuscript was lost. God said to Joseph:

"For behold, you should not have feared man more than God. Although men set at naught the counsels of God, and despise his words-


Behold, thou are Joseph, and thou was chosen to do the work of the Lord, but because of transgression, if thou art not aware thou wilt fall."

So basically, sometimes the easiest and fastest way to help your child understand something is to let them do it wrong. God knew the manuscript would get lost. He tried to warn Joseph, but Joseph didn't or couldn't understand, so God let him see for himself. 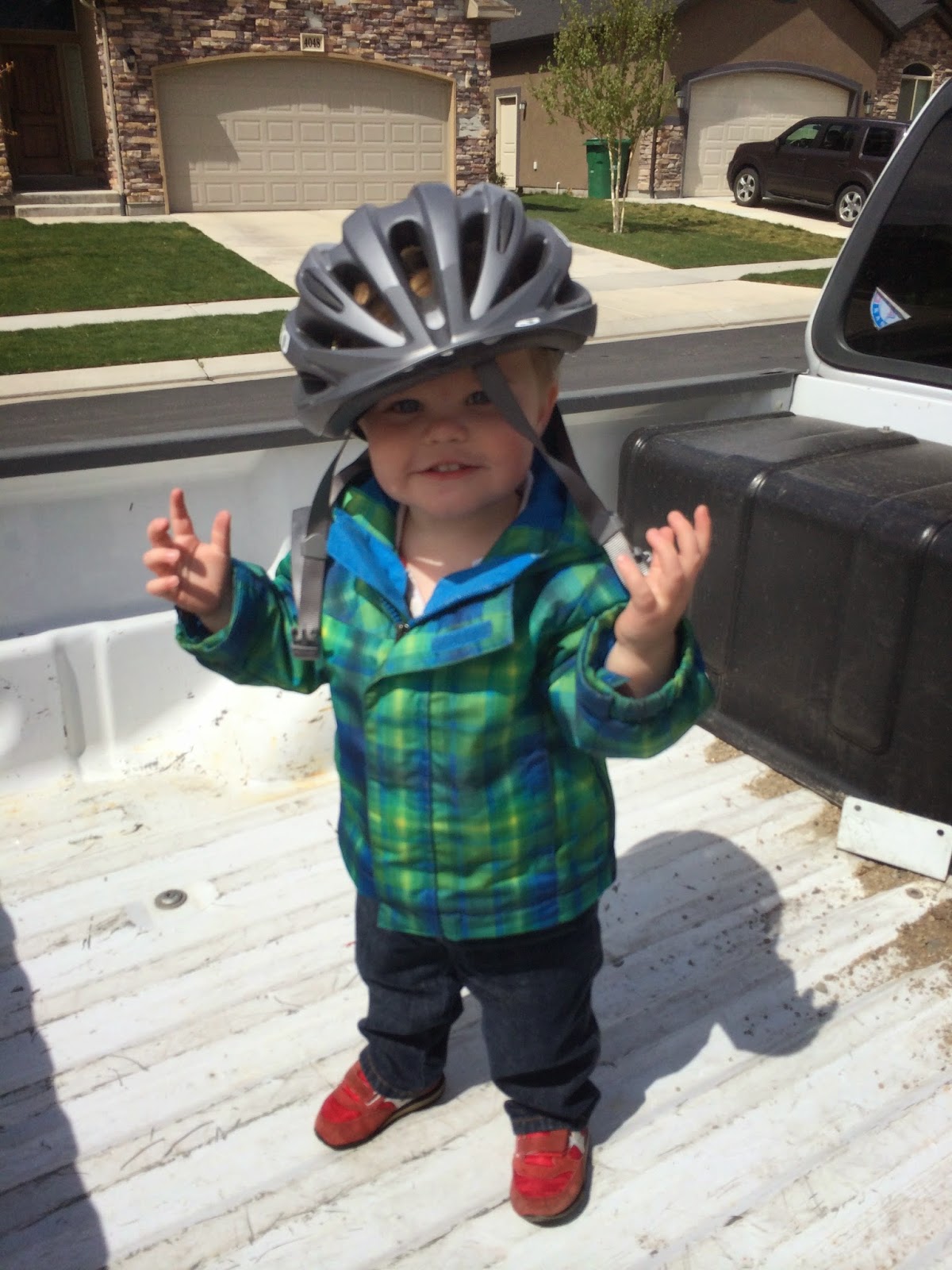 We had the hardest time finding a baby gate that would work in our house due to the configuration of our stair case. After several failed attempts and wasted money, we decided just to teach Winston how to go down the stairs safely and forget the gate altogether. This worked phenomenally for the first two months, but then he got cocky. He started feeling very comfortable in the independence his mobility brought him and even though we constantly told him to "turn around" every time he went down the stairs, and even though he knew how to turn around and had done it safely tons of times, he wanted to see what would happen if he didn't. After probably hundreds of warnings which he ignored, I either had to go physically turn him around myself, or carry him down the stairs. Eventually I decided to just let him fall. You might think I'm a horrible mother for doing this, but its only a few stairs and they are carpeted so I knew he wouldn't get hurt, but he would definitely be scared. So he walked to the stairs, I told him several times to turn around, he ignored me, and tried to go forward. Guess what happened? He fell. Then he cried for about 3 minutes, got over it, and now goes down the stairs safely again. Problem solved.

3. Give them choices and respect their agency.


When God placed Adam and Eve in the garden of Eden he gave them the following commandment:

"And I the Lord God commanded the man, saying: Of every tree of the garden thou mayest freely eat,


But of the tree of the knowledge of good and evil, thou shalt not eat of it, nevertheless, thou mayest choose for thyself, for it is given unto thee..."

One of the greatest gifts God has given his children is the ability to make choices, or agency. It has been incredible to me to watch Winston, literally from birth, have the innate desire to make his own decisions. This scripture has been a huge guiding principle in my parenting tactics so far and I hope to continue with it. Obviously I have to restrict Winston to age appropriate choices, but letting him experience the freedom of choosing what he wants to eat from any of the {ideally healthy} options on the table, or allowing him to choose the book he wants to read before bed time gives him so much satisfaction. I feel like agency is something we need to fiercely protect in our children. If God was willing to let Adam and Eve make a decision as impactful as partaking of the fruit of the tree of knowledge on their own, obviously exercising our agency is something he wants us to do and something we have to learn to do properly. By allowing Winston to start making decisions for himself as a one year old, I hope he eventually gains the understanding of what a precious and important gift this is from God and by practicing on small things, is able to make important decisions on his own as he grows.


This principle comes from Christ's experience as he was suffering in the Garden of Gethsemane:

" And he went a little further and fell on his face, and prayed, saying O my Father, if it be possible, let this cup pass from me: nevertheless not as I will, but as thou wilt."

It must have been a horrific experience for the Father to watch his Only Begotten Son who has lived up perfectly to every commandment ever given, suffer the pains and afflictions of all of his other children. He could have stopped it if He had wanted to, but oh how grateful we all are that He didn't! He allowed the Savior to complete the Atonement for us, because He knew the good that would come from the suffering.

Growing up, and now as a parent, I have seen so many parents protect their children from hard things. They shield them from the natural consequences of bad decisions, or bail them out when things are tough for them. On one hand, I get it. It's never fun to watch your child suffer. I think its a natural instinct for most parents to want to save their children from all heartache and challenges that they possibly can, but I don't think that's what God wants. With Winston, I'm just barely applying this principle, but it starts small. Sometimes he wants me to carry him up the stairs to the slide at the park, but he can climb them by himself. It takes a little grunting and pulling on his part because they are big stairs. Its a bit of a struggle for him, but he can do it. And he's better off for it, so I say, "No, Win. You can do it." And I cheer for him while he fight up those steps all on his own. That's so silly, but it's the principle I want to teach him later on when he's going through something really hard. I will stay with him, I will cheer for him, but I won't take the challenge away.

There are so many more principles I want to write about, but this is enough for one post. Maybe in 10 years when I have way more than 18 months of parenting experience, I will look back on this post and laugh at my theories. My examples seem so insignificant typed in black and white. But then again, maybe not.


Have you used the scriptures as a parenting guide? What was your experience?