I changed my mind.

1. Cupcakes
I was a fresh-faced  college kid when the cupcake craze hit. It was all about Sprinkles this and cupcakes that. I'm ashamed to say I was simply not impressed. Maybe it was because I didn't have time to stand in line for hours on end just to eat a small baked good {hello? midterms?} Or maybe it was because cupcakes in my experience were usually a little dry and I'd rather have a homemade chocolate chip cookie any day of the week? Whatever it was, I sort of missed out on the excitement and never noticed. Until last month. One of my cutest friends stopped by to bring me a treat while I was quarantined for the three weeks due to The Plague that overtook my family. It was a  Better Than What cupcake from Cravings. Guys. There is a reason this bakery won Cupcake Wars on Food Network. First of all it's chocolate so...duh.. but then there's this decadent caramel sauce filled center and homemade toffee and whipped cream topping. I. Can't. Even. I have already been back to get another one... which like doubles the number of cupcakes I've eaten in the rest of my life combined. Make this dessert a priority in your life this week.

I might live in Utah but I still claim my Texas roots, I wore boots with my wedding dress, country music is my bread and butter. Five of the six preset radio stations in my car are country stations. Several months ago though, I started feeling a little disenchanted with what I was hearing. Don't get me wrong, everyone loves a good tailgate once in a while, but honestly I started feeling like, "Hello, can we please just do something else besides drive around in your truck at night?" So many of the bands were just picking phrases out of a word bank for an easy chart topper. Come on y'all, we can do better than that! I don't even drink so I really can't relate to your 6 pack or whiskey in literally every. single. song. Lately I just find myself changing the channel to listen to other talented artists who apparently have a much larger vocabulary. Winton's jam of the week is Geronimo by Sheppard but if you're still doubting me on the status of Nashville, here's a fun mash up to prove my point.

And now you know I'm crazy. But its true. And let me just clarify up front, I'm not anti "family planning"... heaven knows those kids need some space between them, I mean have you met Winston? I do want more kids but I'm gonna need a minute. However, I am just recently anti hormonal birth control. I saw this article posted on Facebook and was intrigued. Does homonal birth control really cause abortions, even though its a generally accepted practice used even by people who claim to be pro life? Yikes! Well after reviewing the pharmacology of a couple of methods I have tried personally, the facts checked out and I'm rather horrified by the whole thing. Its funny to me though now that I never ditched it before... the whole Mommy world is going all "natural" and "organic" with cleaners and food and toys and essential oils, yet downing synthetic hormones on a daily basis? That doesn't make sense. Especially when there are plenty of ways to prevent pregnancy without them that are just as effective! Why did no one educate me on this when I got married and incorrectly assumed I'd have to start taking something that would make me temporarily insane? {Evan can attest to this}. If you and I went to get frozen yogurt together, I would talk your ear off about this topic with at least 10 other reasons why hormonal birth control is a bad idea but I'll just finish by saying: Don't buy into it. You don't need it. If you want to know more, meet me at Yogurtland.
4. Utah Winters

We have had no snow on our front lawn this entire winter. No snow! I should probably be lamenting this fact rather than celebrating it because come summer time we may be in a world of hurt but I just can't help myself. After all the whining I've done over the past seven years I feel like I owe Mother Nature a standing ovation every time my thermostat reads 50 or above. Picnics and bike rides year round! 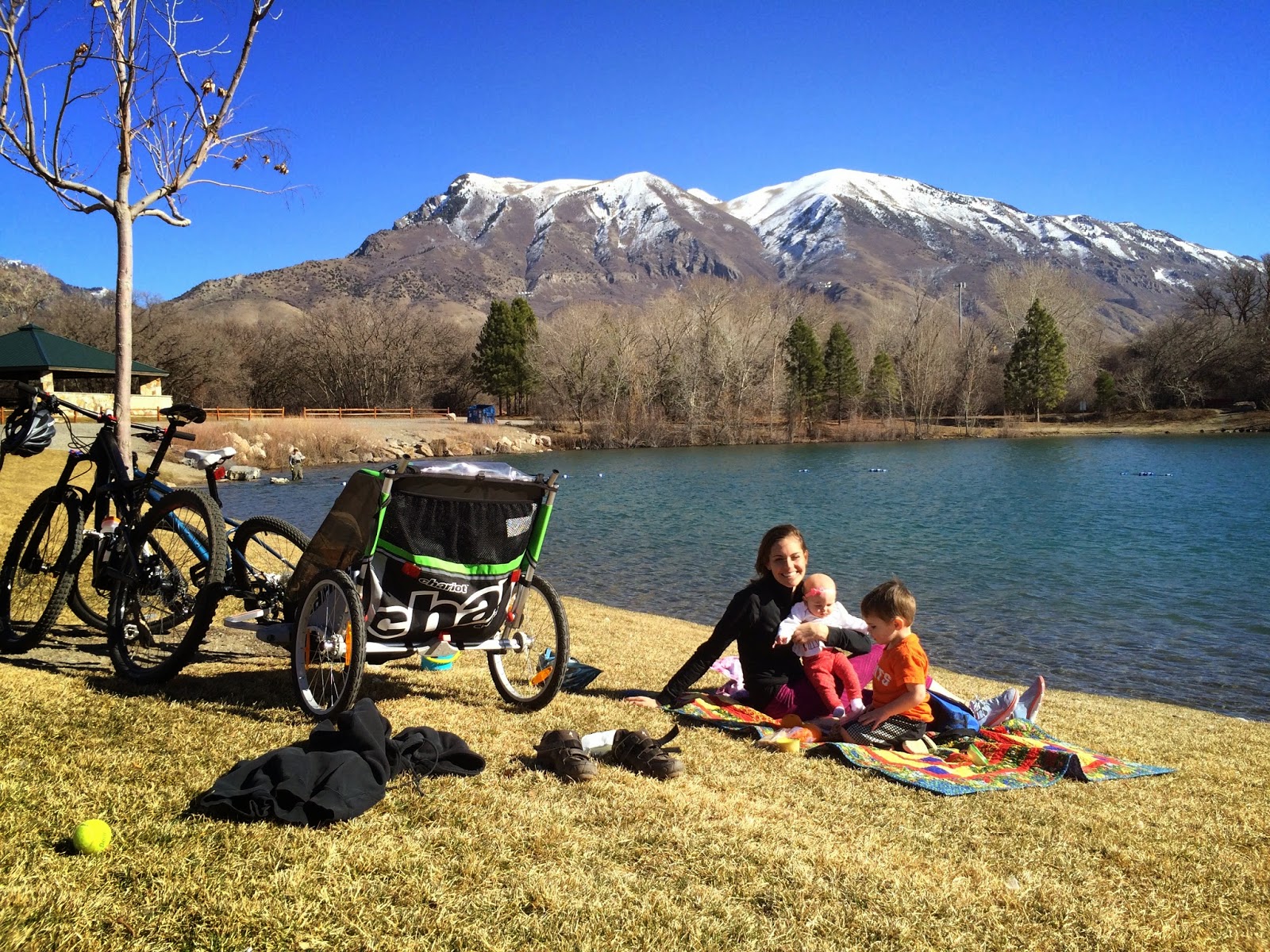 5.The Foolish Man
I started thinking about this parable the other day and it all the sudden struck me that I've been interpreting it wrong my whole life.

So I always thought this story was sort of a biblical version of The Three Little Pigs and the Big Bad Wolf. Foolish Man is lazy like the first two pigs and doesn't care about doing things the "right" way and so in the end he loses. But as I have been studying The Rock, I realized that Foolish Man actually wasn't lazy at all. Foolish Man wasn't out playing in the waves and tanning on the beach. He was working hard building his house just like Wise Man was. I think he was using good strong materials too, I mean the scripture says "great was the fall of it," that thing wasn't built out of straw. The problem was, he just didn't know how important it was to pick the right foundation. He was probably right next door to Wise Man! Wise Man found a rock {actually, The Rock} on the shore to build on and Foolish Man knew Wise Man was a smart guy so he figured he'd build right next door because this must be a great place for a house. He thought he was doing just what Wise Man was doing, but he missed the key ingredient. I don't think Christ was speaking to "lazy people", to the people who had no interest in his gospel, with this parable. I think he was speaking to his followers. He was warning them that you can't build next door to the rock. Even though next door is "the charitable acts of the Relief Society" or "Joseph Smith". Those topics and real and good and true, but they aren't The Rock. And if you build on them as your foundation, as the center of your beliefs or testimony, you'll still fall. There is no substitute for The Rock, for the Savior Jesus Christ. In General Conference in April 2013, Bishop Dean M. Davies gave a great talk on how to test your foundation and see where you've built. In it he says:

"Brothers and sisters, none of us would knowingly construct our homes, places of work, or sacred houses of worship on sand or rubble or without appropriate plans and materials. Let us accept the Savior's invitation to come unto Him. Let us build our lives upon a safe and sure foundation. I humbly testify that by anchoring our lives to Jesus Christ and to His Atonement and by carefully following His plans for our happiness, including daily prayer, daily scripture study, and weekly partaking of the sacrament, we will be strengthened, we will experience real personal growth and a lasting conversion, we will be better prepared to successfully withstand the storms and calamities of life, we will experience the joy and happiness promised, and we will have the confidence that our lives have been built upon a sure foundation- a foundation that will never fall."