Something changed inside of me when I was asked to be the local Relief Society President in our previous ward (a leader in the women's organization in our church). It was as if the sound of my heartbeat had changed. I woke up each morning with a single word pulsing through me, gently, quietly, but persistent and firm. Testify. It came over and over like waves of the ocean crashing into the sand. Testify. Testify. So I did. I testified of Christ- of his love, of his power, of His mercy, of his grace, of his healing, of his transformation. I testified in text messages, at the splash pad, on walks through the neighborhood, on mountains, from the pulpit, and in personal interviews. I most certainly didn't do it perfectly, but I did what I could.

I don't have that responsibility anymore and for a while the pulsing quieted, or maybe just got drowned out by the chaos of a cross country move and holiday madness with our family. As I brainstormed creative ways to share our news that we will be adding another baby to the Fox crew, the waves came rushing back in, Testify. So here I share my experiences on the decision to add yet another child to our circus. It's incredibly tender and sacred to me- and putting it on the internet seems an odd way to treat something so special, but then Testify. {pause for a moment and go listen to Testify by NEEDTOBREATHE please and thankyou.}

Evan and I had just returned from his Masters degree graduation in West Lafayette Indiana. While there, his professors had encouraged him to quit his job and move from Utah to continue on to the PhD.  What a wild concept. We decided to go to the temple to pray and seek guidance and inspiration regarding this decision for our family. While at the temple I felt exactly zero direction on that topic whatsoever, however as I was praying I had a little image appear in my mind, it probably only lasted a second or two and yet I can still revisit it anytime I want. I saw a little boy jumping on my bed with Winston and Cosette. They were our only two children at the time (ages 3 and 1). As I saw the image I felt a suggestion that there was someone else ready to join our family. After sharing my experience with Evan and counseling together we agreed we were happy to have a third child and soon I was expecting... but were stunned to find out it was a little girl, our lively Vivian Faith.

A few weeks after Winston's diagnosis with Autism Spectrum Disorder, we were reeling at all that lay ahead for him. Vivian had just turned one and it seemed like an excellent time for some spacing. After another trip to the temple I told Evan I wanted to take a break from having babies for a while and focus on helping Winston get the therapy he needed. It made complete sense to us. Only, that's not how God works. The next morning I got a text message from a friend who had been with me at the temple the day before. She said I had seemed a little off and wondered if I was pregnant. What an absurd question, I thought. But then I took a test anyway and it was positive. So much processing ensued for me but I remembered that little boy from a couple years before and thought, oh okay well now it must be his turn. But then we had sweet Miss Noelle Jane.

I really really really wanted to be done having children. Four kids was a dwarfing transition for me and I was finally feeling like I belonged to myself again. I heard people talk about that peaceful feeling of knowing their family was complete and for months and months I begged in prayer for that feeling. I never got it- I got promptings to try other things like grad school and opportunities to serve in new ways in church but the question still hung in the air unanswered. People love to ask that question- "Are you done?" I told them yes, I gave away our arsenal of baby gear, maybe I could make it true. The image of the little boy occasionally haunted my thoughts but then surely two more girls had earned me the right to say to God, "Hey, I tried!".

I had officially declined my admittance to Claremont and miraculously after the mountain of pain I climbed to get to that decision, I summited it to a view of immense peace. I was washing the dishes one morning with Noelle playing at my feet, and Evan walked by and casually (I think jokingly knowing how strongly I felt about the topic) said, "Don't you think she needs a little brother?" A heat wave went through my body head to toe and I dropped my dishes into the sink and started crying. I didn't tell him, just let him keep walking.

A few weeks later we were back at the temple, after their closure for over a year from Covid it was the sweetest reunion. After the service, as we sat in the sacred quiet space, Evan again mentioned a feeling we might need to consider having another baby. I habitually refused and changed the subject.

Elder Clark Gilbert was speaking at our stake conference and we were at the adult session on Saturday night. We had recently found out Evan would be offered a new position with AstraZeneca that would require relocation to the East Coast. We were prayerfully considering our options during this meeting. Again, I got exactly zero inspiration on the subject of relocating our family, and instead got something entirely different. Elder Gilbert started to share about a painting and a story from the New Testament, Christ's Conversation with the Rich Young Ruler. My favorite account of the story is in Mark chapter 10:17-22 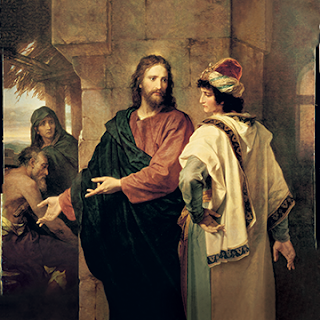 To summarize this believer runs to Christ and kneels at his feet and asks what he needs to do to inherit eternal life. He tells Christ he has kept all the commandments from his youth and in the Matthew account of the same interaction we hear his follow up question, "What lack I yet?" (Matthew 19:20). Then comes my favorite verse:

Mark 10:21 Then Jesus beholding him loved him, and said unto him, One thing thou lackest: go they way, sell whatsoever thou hast, and give to the poor, and thou shalt have treasure in heaven: and come, take up the cross, and follow me.

But the man went away sorrowing and chose not to accept Christ's invitation.

As Elder Clark was re-telling this story, he said, "It was as if Christ were saying to this man, 'All you can see is what I'm asking you to give up, but what you can't see is what I'm offering you' "

As he spoke those words I had a new image appear in my mind, like had happened so many years ago, but this time I saw an image of Christ dressed in red robes holding a baby in His arms, offering him to me. I felt entirely saturated in love for that brief moment- something I positively know I couldn't have created myself because if I knew how I would surely do it every day of my life. My wall of protests about my body, my free time, any semblance of a clean house, the grad school I had recently let go of, and the shocked, annoyed, and sometimes downright rude comments people make when you go anywhere with so.many.children. seemed entirely useless in that moment. But it wasn't a demand, it didn't feel harsh or wrapped in guilt, it was simply an invitation, an opportunity. What if the Rich Young Ruler had said yes in his moment? How would his life have changed? What scriptures might he have recorded for us if he had been following Christ along with the other apostles? I felt so much compassion for him, and thankful for his story. I know God has different invitations for all of us, and I probably would have picked a different one if I had the chance, but then that's kind of the point isn't it? I'm thankful I could learn from the "no"  he gave to his invitation that gave me the perspective I needed to say yes to mine.

AND SO baby Fox #5 is on his way and will make his debut sometime around July 16th!