We've had fights before. Like the time I told Evan he didn't put enough cheese on his pizza and he got mad. Or the time he told me I had bad breath and I got mad. But this is different.

When I started to realize what a die hard Giants fan Evan was, I got a little worried. I asked if we could be Rangers fans too? He told me we could because they'd basically never play each other because they are in different leagues. Unless they both went to the world series which was impossible.

Now lets not have any false pretenses here. I am by no means a die-hard sports fan for any team. And I distinctly remember being at a Rangers game on a date in high school and asking who was on "third plate"(there was no second date). But Evan is. I'm pretty sure Giant's baseball comes second only to God. And sometimes me. So I decided to embrace this passion of his. 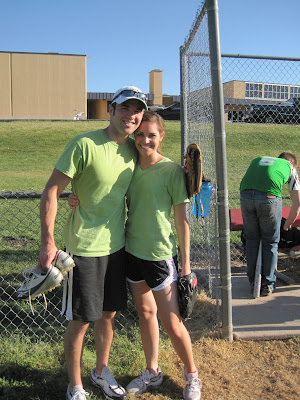 We joined a co-ed softball team with our friends this summer and I learned the rules. After seeing me play, Evan also instituted private lessons so I could throw the ball further than ten feet. I promise I'm not completely and totally un athletic... but I'm a long distance running, triathlon doing, yoga kind of girl. So I improved slightly, or so I thought. Until Evan moved to the spot right after me in the batting line up. I miraculously made it to first base, no doubt because of a walk, but in any event I was there. Evan gets up to bat and apparently is just feeling it that night because he hits a jack to the back of the ball park. Clearly I had a head start and should have been just fine... however that did not prevent him from almost having to pick me up and carry me on his back around the rest of the bases so he didn't have to lap me.

So then I decided, hey lets just embrace the pros, huh? They know what they're doing and they don't need any help from me. 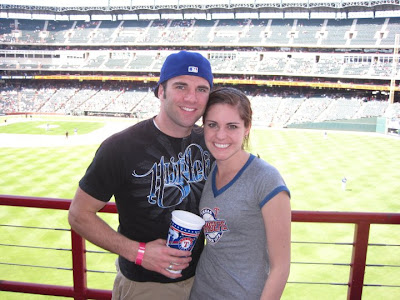 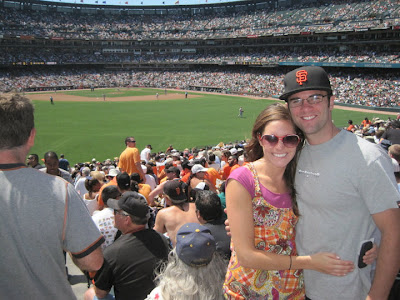 And I was a lot better at this! I learned the Giant's batting line up, I watched Lincecum pitch his 14 k game, I wear a Giant's hat when I go running, I'm all about it! Evan owns an official on feild Rangers cap, we have a Texas Ranger's cookbook signed by all the players, he cheered for Cliff Lee against the Yankees, this is true love!

But seriously. GIANTS and RANGERS in the World Series?? Now what are the odds of that? I can't help but feel slightly responsible for this. All I have to say is I love my home and I love my husband.

But I'm still not telling you who I'm cheering for.
Labels: Giants