So Evan's family is all about real trees. They live right next to the Sierra Nevadas and usually go up to the mountains and chop down their own little fir and bring it home. Sounds like some fairy tale Christmas right? Decorating the Christmas tree is a big deal at my house too, we each have our own box of ornaments that we have collected through the years and we have our classic Amy Grant Christmas CD blaring in the background as we debate about whose year it is to put the star on the top. I love it! But I have to admit taking a tree out of a box from the dusty attic and putting it together piece by piece lacks the magic of one that fills the house with the smell of pine (we had a candle for that ). When I mentioned looking at fake trees to Evan he just crinkled his nose up into this I'm-trying-not-to-snarl-at-the-idea face so needless to say I was happy to adopt his tradition for our home!

Unfortunately, a Christmas tree wasn't really in the budget this year.

Fortunately.... I make the budget.

So I came up with a brilliant plan, Thursday I had the day off and while Evan was hard at work, I went to the tree lot to see what I could surprise him with. I was hoping I would get some jolly old Santa look-alike salesman who I could sweet talk into a great deal. Strike one, it was a college kid and now I can't even use the flirt tactic now since I have a ring on my hand. So I tried a different approach. I told him, "I am from Dallas and we just don't have real trees down there and I have never had one before so I would really like to be able to have one this year on my first Christmas with my new husband (bat the eyelashes just in case it helps)." Strike two, the kid says to me, " We do too have real trees in Dallas. I'm from Dallas." Shoot! Okay time to get straight with him. "Alright, here's the deal. I have ten dollars in my wallet and I need a tree. What can you give me?" Now apparently, they do not sell Christmas trees for ten dollars, but that wasn't really going to work for me. "Just give me the Charlie-Brownest tree you have," I insisted. He just laughed at me and finally he walked over to the two smallest trees on the entire lot which were marked at $16.99 and sighed "I guess we could give you one of these for 10 bucks." Sweet! Now when I say the smallest trees on the lot, let me rephrase that and say that it was really just the top of another Christmas tree that had been chopped right off and stood at a grand three feet high. But I have probably never been so proud of myself for any other purchase in my entire life. He ripped off the tag the lot owner had written and wrote a new one that said $10.99. Okay, close enough. Note to all you new Christmas tree buyers, the plastic stand does not come with the tree. It is an additional $7.99. Excuse me sir did I not make it clear that I have ten dollars in my wallet? So I figured I could improvise. I found and old pitcher in our kitchen and went outside and filled it with rocks and then water to hold our up tree. Then I wrapped a big cardboard box in Christmas paper to boost out tree off the ground another three feet. Okay its not Rockefeller Center, but I couldn't wait for Evan to get home!

We spent the night decorating our little baby tree and listening to Christmas music and drinking hot chocolate and it was the perfect way to start our first Christmas together! 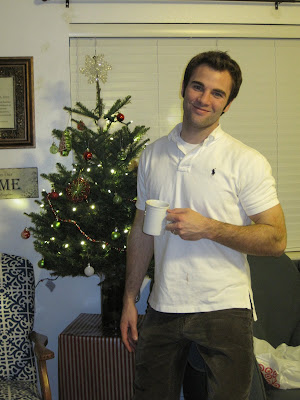