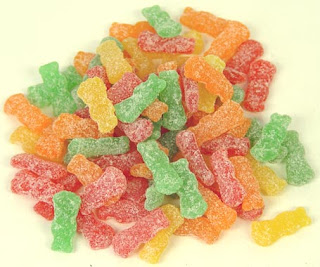 Ever have those days when you are grouchy, negative, unpleasant, and just generally not so helpful? In our house we have a name for that. We call you a sour patch.

Last spring, Evan was working for an auto glass company who he had been with for over a year. They called him one day to inform him that his job description had changed. Rather than fixing windshields like he had been hired to do, he would now be spending the majority of his time dancing on a street corner and waving around a hot pink sign. Don't worry though, his pay would be the same. Seriously, they really did that. He was absolutely livid, and although I found it completely comical and could not stop laughing picturing him like one of the Ceaser's Pizza Hot 'n' Ready boys, he found nothing funny about it and there was no soothing his bitter mood. He was grouchy, negative, unpleasant, not so helpful, and probably a few other words too. The next morning I dropped off a package of Sour Patch Kids (his favorite candy) at his work before he got there as a little bribe to help him make it through the day and try to cheer him up a little bit. It didn't work. He put in his two weeks that afternoon. But hey, the title stuck.

Evan has a little different approach. When I'm the one being a sour patch, he takes on this dramatic fake-crying voice, buries his face in my shoulder and moans about how "Life is so hard! We have a beautiful house and well-paying jobs and we go to a great school and we are surrounded by family, and to top it all off we are madly in love! What did we do wrong to deserve all this?? Our lives our so very terrible!" (sniffle, choke back a sob). Thank you husband. What was wrong with the candy idea?

So I admit it, I have been the one being a sour patch this week. I don't know if it was the fact that I had a few extra tasks to get done at work (what, you mean I have to actually do stuff to get paid?) or the fact that I spent an hour making this delicious new recipe that turned out to be completely disgusting (is that someone's idea of a joke? publish nasty things and see who falls for it and makes it for dinner?) or just knowing that the rest of the world is celebrating spring break right now and that doesn't exist at BYU, but in any event, I earned the title. So in line with my husbands list, I decided to focus on the brighter things in our life this week. Here's to:

-Finishing our taxes all by myself, and hey a return check never hurt anyone either!
-Evan finally getting contacts for the very first time: Direct quote, "I'm living the Bluray life, baby!"
-11 cent raises: Celebrate the small stuff right?
- A TV antenna: We stayed up until midnight just flipping through the channels over and over again,      Why? Because we can!
- Packages from Mom: LOVE HER.
-My favorite pair of jeans: Sometimes you have to wear them three days in a row. You just have to.
-Family bike rides for FHE: Who says you need kids for that?
- And Seminary dinners: Tucanos + the gospel= Heaven.