My only disappointment in finding out we are having a baby boy was this: deciding on a name.
I had lists and lists of girl names all written out and ready to go, I was in love with all of them and Evan could have had his pick! (well... you know....if he picked the right one that is). But my list of boy names... pretty much non-existent.

A few months ago Ev and I were asked to speak in sacrament, our topic: The Importance of a Name.  Weird right? We thought so too. How on earth are we going to fill up 45 minutes of time with that?? What happened to faith, prayer, or repentance?

We were asked to speak on Elder Ballard's talk from October 2011 General Conference where he talks about the name of our church, The Church of Jesus Christ of Latter Day Saints and how important it is to use this official name of the church as opposed to the nick name, the "Mormon Church" (eh hem....excuse my button on the side bar) because it helps people understand that we are Christian, that we believe in and worship Jesus Christ as our Lord and Savior.

As I started my study of the talk I took a step back and thought about the importance of names in general. In our church when a baby is born it is tradition to give them a name and a priesthood blessing in a formal setting. You might compare this event to something like the baptism of a baby in the Catholic church, although the name and blessing they receive is not in any form a baptism at all (we postpone that ordinance until the age of 8). It is, however, a significant event where the child is recognized and blessed with the things God has in store for him or her throughout the coming years and also where their name is officially recorded on the records of the Church.

I thought about times in the scriptures where the Lord changes someone's name, like when Jacob is re-named Israel or when Abram's name is changed to Abraham. I thought about all the different names for the Savior throughout the scriptures: Prince of Peace, Jehovah, Redeemer, Light of the World, Jesus Christ. I found is fascinating that God cared so much about names, and that by using different names people are affected differently.

Now let's be realistic... I do not think my little bun in the oven is going to turn out to be a prophet of God. But all this study of names has got me thinking, this is a big BIG decision!

I realize your dog's name is probably Winston. However that does not concern me at all.
We love this name because:
1. He won't have seven other Winston's in his first grade class and
2. Because we really admire Winston Churchill.

Evan has had this quote hanging in his office for about a year now and I think it is so inspiring:

Now you are thinking of Dakota Fanning and that this is a girls name. This also does not concern me at all. Mostly because I think they gave her a boy's name not the other way around.
We like this name because again
1. He won't have to share his name with other people and
2. Evan served his mission in North and South Dakota. It was a place for a lot of growing and giving on his part and its a place he loves more than anywhere else in the world because of all the service he gave there and the people he helped.

However his nickname would be "Dak" and never "Cody"
Because I hate that name.
Sorry if your name is Cody.
I had a bad experience.

After Gilmore Girls of course.
Just kidding.
Think Rory Mcllroy.
To be honest, the Baby Name Genie suggested this one to me and I simply just loved it.
And Evan didn't immediately reject it like most the other names I love.
That's all.
Evan's dad is a golf coach?
I suppose I'll have to do some more searching for better significance.
But again not a name he'd have to share.
And Michael because that is Evan's middle name and we have had a nightmare of a time trying to fit "Evan" in with anything as a middle name.
Come on, its Daddy's first born son. He's got to pass something down.

Mostly I'm hoping our little one will give me a great big kick or something one night as we lie in bed discussing names that lets me know what he wants.
But until then... on with the debate!
Feel free to post comments/suggestions/opinions.
And we will take them into consideration. Or not. As we please :) 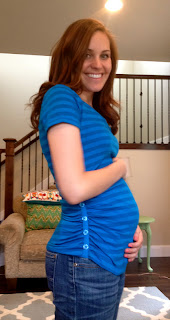 Apologies for the picture... no make up :)