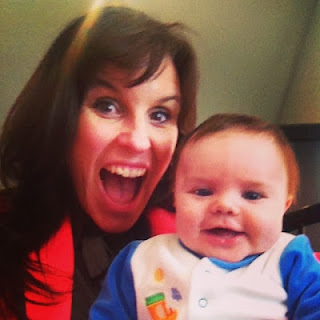 First thing on the agenda this month was getting the little man to sleep in his crib. I started having anxiety attacks that he was sleeping in his carseat and it was going to cause SIDS but he still refused to sleep in the bassinet so the crib was our only other option. It took about a week of transition but we made it and now he sleeps in his crib every night! He usually slept from 10 pm to about 3-4 am, ate, and then went back to sleep til 6-7am. The sad thing is he is so ridiculously wiggly and they aren't supposed to have bumpers on their cribs anymore so at least twice a week I wake up to him screaming with his legs sticking out of the crib slats! Poor thing! Nap time was a whole different ball game though...for some reason he absolutely refused to take a nap longer than 20 minutes, and we only got two of those a day. It made for one tired little baby most evenings. The only way he ever took a longer nap was if we were in the car, instantly passed out. We'll have to keep working on that. He spent most of his time flirting with the ceiling fan, attempting to shove his entire fist in his mouth, and creating absurd amounts of laundry for mom (hence all the naked pictures this month... you can only scrub out so many stains in a day!) I felt like Winston and I really hit our stride this month. We weren't traveling anywhere, just home and creating a routine and I really felt like a mom. I learned that I have to eat a lot more calories than I want to to make enough milk for this little guy, but that none of those calories can come in the form of a sweet potato. Won't be making that mistake again. We filled our days with tummy time, snuggling, baths, attempting to read books and play with toys, rides in the stroller, and of course tons of diaper changes and feeding sessions. I made a goal to speak to at least one other adult each day so I didn't go crazy inside our quiet little house. We started attending play groups, hanging out with Grandma and Grandpa, and I also went back to work! The Mommy guilt hit if I wasn't doing something with him every minute of the day. I felt bad if I was holding him all the time because then I would "spoil" him but I felt bad if I wasn't holding him because then I was sure he was going to get a flat head from being in his carseat/stroller/bouncer/swing too much and have to wear a helmet to fix it. Hopefully by the time a second baby comes around I'll be too busy with both of them to analyze any of that. Having a little one has definitely altered the things we can do but for the most part we just take him along with us on date nights or wherever we want to go and he's happy as long as he's fed. Winston recognizes his Daddy's voice as soon as he gets home every evening and he starts talking up a storm. He doesn't like Dad's glasses though, just stares at him until he takes them off. Ha! 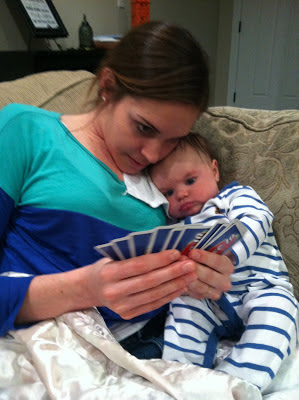 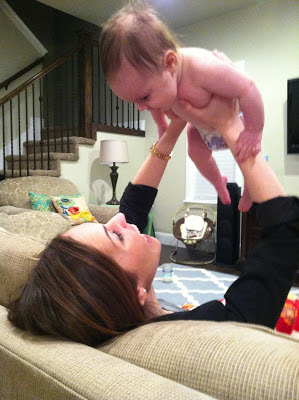 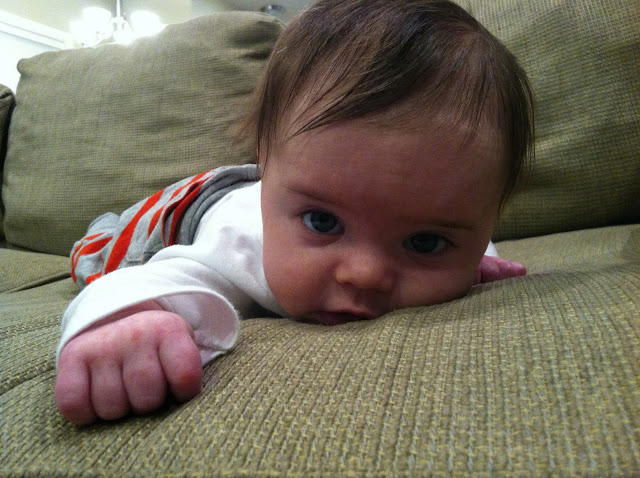 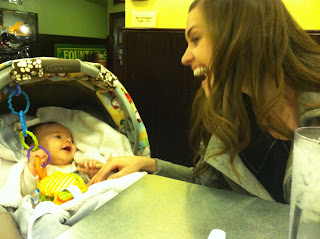 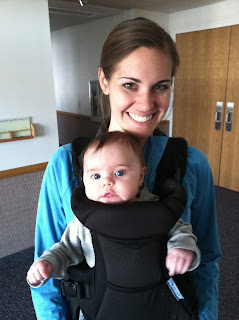 Favorite Things:
Moccasin boots: Adorable things from Baby Gap. He wears them every day and I am obsessed. I feel justified considering the snowman Evan and I built the first week of December is still in our front yard. 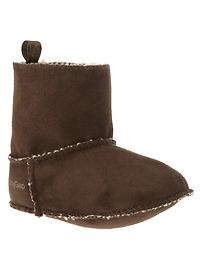 The Chariot stroller: Obviously. We use this almost every day and thankfully it sure lived up to its hype. I literally feel like its floating in front of me as we run. It makes me so. very. happy. 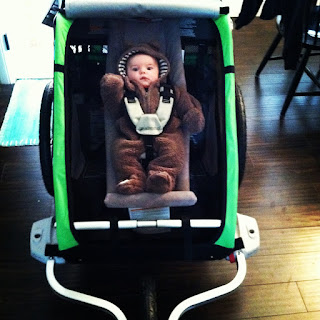 Rings: Winston loves these simple little toys and gets super excited when he manages to hold on long enough to stuff one in his mouth. 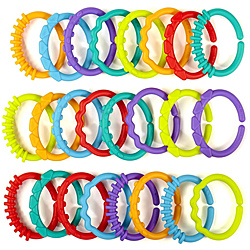 There are tons of them now since I am back at work one night a week and one weekend a month plus any extra holidays I can pick up. Evan takes over and is apparently teaching our son the necessities of life like that he needs to love sports and the scriptures. And that its okay to fall asleep while reading... 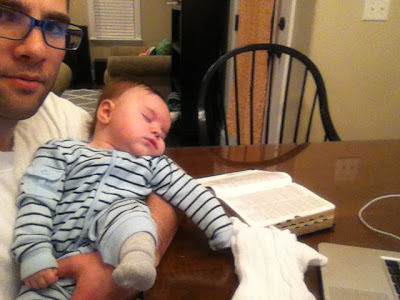 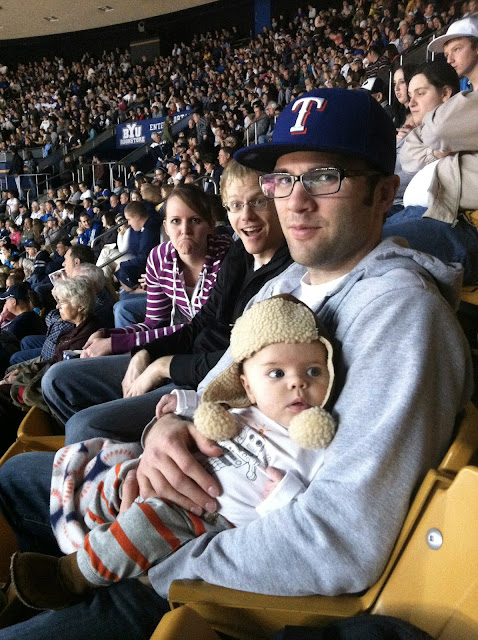 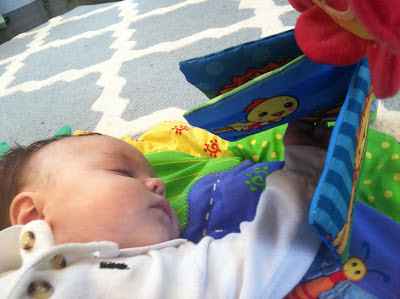 One afternoon I was sewing with my Grandma and Winston still does not appreciate the sound of the sewing machine so she took him out to Grandpa and told him to babysit for us. I went out to check on him about twenty minutes later and found this: 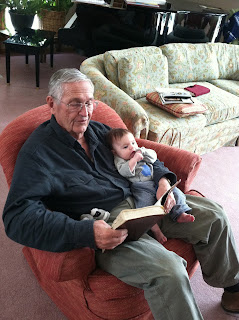 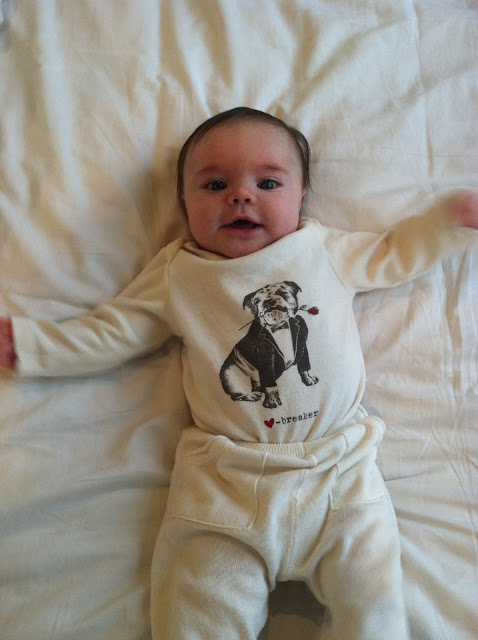 Haircut!
By the end of the month he had a seriously scraggly mullet.
Thanks for making him look good again Aunt Heath! 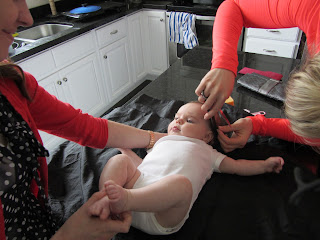 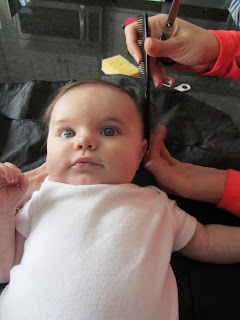 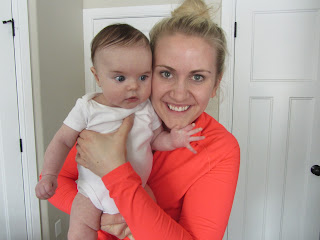