Evan is legitimately terrified of spiders. Also any spider he ever sees is for sure a black widow. He "knows what they look like, okay?" He claims it is because his bedroom was in the basement growing up and he always found spiders. I have never once seen a spider at his parents home and we always stay in the basement when we go... mystery.

So anyway, a few nights ago these adorable neighbor children rang our doorbell, which doesn't happen too much since Winston doesn't have friends calling for him to play just yet. When it does happen though, it usually ends up being pretty entertaining. The visit I got last month was from some of my primary girls pulling around a wagon of toys for sale that they had outgrown. I bought a bedazzled Mickey Mouse ring for 25 cents. You can borrow it if you're super nice to me. But these poor children were crying! They were in tears, really. I was feeding Winston at the moment so I was huddled in a chair out of view but I could hear the whole thing.

"Are you afraid of spiders?!" they sobbed.
"What...?" Evan immediately thinks this is some sort of prank. Ha.
" There is a tarantula in our garage and our dad is out of town! Please! Can you come get it??" they begged.
Evan turns around and looks at me desperately and I can't help busting out laughing.
A tarantula??
He tells them he'll be there in a minute.
{The rest of this is second hand because I had to put Winston to bed, but I imagine he needed that minute to put a tough face on}
So he walks over there and inside the garage is their mom standing {and squirming a little I imagine, ew!} right by the spider.  It seriously is a tarantula. A real live one. She tells him she just doesn't want it to get away or into the house anywhere so she's been standing there watching it. I think his tough face melted at that point because she told me he then confessed his one fear in life was spiders. Haha! Poor guy. But he said he'd try to figure something out, so he came home to get a bucket. He walks back over to their garage with the bucket in hand and in the time he has been stalling "looking for the bucket," AKA trying to figure out what the heck he was going to do with it, another one of the neighbors has shown up to help. This man looks at the tarantula picks it up with his bare hands and says, "Oh, this is just a baby!" and offers to let everyone pet/hold it. I seriously would have paid so much money to see Evan's reaction. Then he just waltzes off with the spider like they are BFF. I'm fairly certain Evan was still having a mild heart attack. {Thank you Trent! I think you saved my husband's life.} 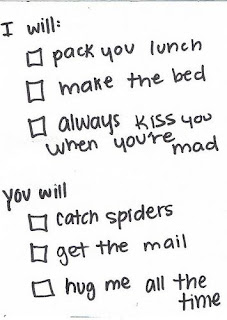 Have you seen this pin on Pinterest? While Winston slept, Evan and I had a late night game of ping pong and discussed our "I will, you will's" sparked by this pin and the tarantula incident. It was very entertaining to hear our different opinions of what are the "boy" jobs and what are the "girl" jobs. I have always wished this list would work for us. I don't like spiders either okay? But here's what our ping pong game revealed about us instead:

I will:
- Slice the roast before dinner
- Drive when we go places together
- Clean the kitchen
- Kiss you like I mean it

You will:
- Take out the trash
- Deal with any and all car issues
- Eat all the leftovers
- Tell me you love me all the time.


What are the boy jobs/ girl jobs at your house?

P.S. Do you like our new look? Thanks Missy Saunders for taking our family pictures! She's awesome, check out her work.
Labels: Evan Laughing