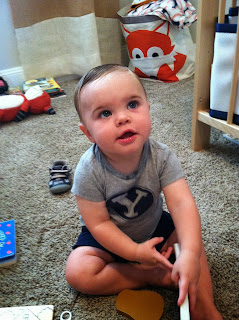 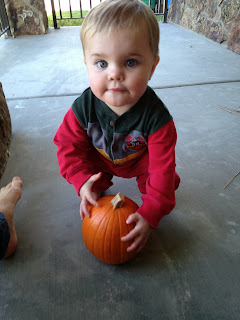 My baby boy grew up this month. He "got wheels" as my grandfather calls it and is first choice
walking/running anywhere and everywhere. At church on Sunday we spent two hours in the hallway taking laps around the building, he is so proud of himself. He's started climbing into everything and I found him stuck inside the drying rack in the laundry room as well as inside the shoe box by our front door. I heard this little whine and looked around the corner to see his feet sticking up in the air and his head inside the wicker box with the lid down on top of him! He started doing this weird gurgle whenever he got mad and the only way I can describe it was the chewbacca growl. It was hilarious and so hard to discipline him when I'm dying laughing at his tantrum. He's in a nap transition phase and some days he wants three and some days he wants one..or zero...whatever. He's quite the little chatter box and gibber-jabbers all the time. The words I can actually make out are "da-da" when dad gets home from work, "mama" usually when he is mad at me and I won't let him do something, "ball" in true boy fashion, and "go" which he says when he wants to leave the house or when he's tired of being at church ha. Winston is a solar powered child just like his father and we spend at least an hour at the park every day plus our runs and any other excuse he can find to get us outside. He loves to throw the ball back and forth and thinks it is so funny!

My mom sent Winston a package with this ball in it and he is obsessed. He chases it around the house throwing it at the walls and doors, laughing when is bounces off everything and saying "ball" over and over. 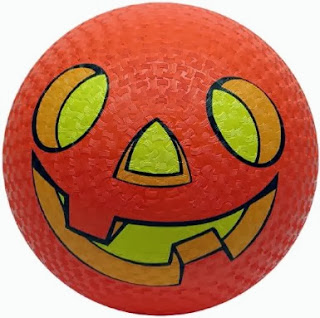 His other favorite thing is tunnels. We discovered this at Fairytale town so I found a park close by with a tunnel in it and we sat inside that tunnel for an hour and then he threw a huge tantrum when it was time to go home. 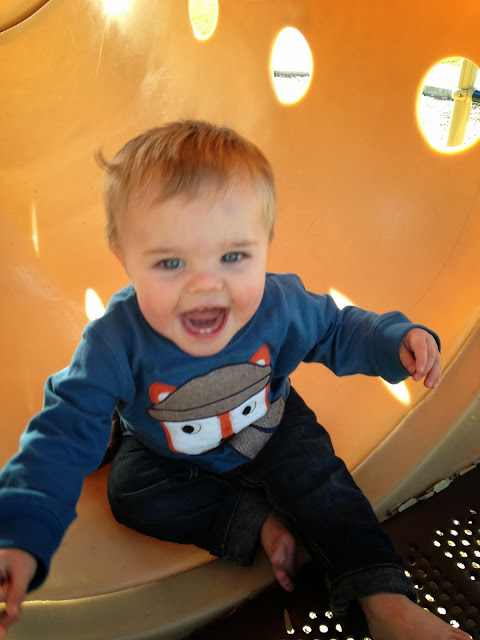 Daddy Moment:
Donuts on a string just because 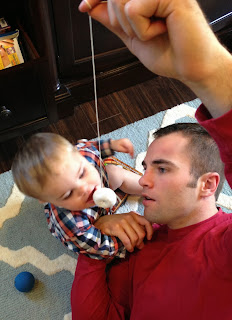 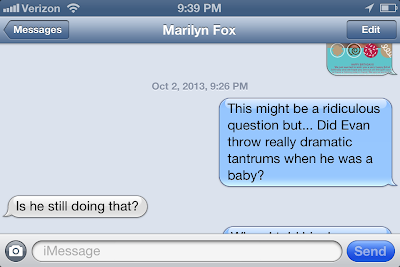 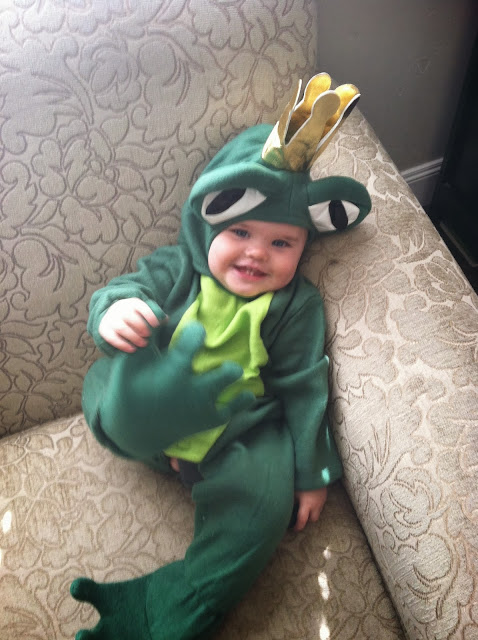 He actually hates his costume and this might be the only picture I get with him smiling in it but I'll take it! Love my little frog prince.
Labels: Winston