How not to wash the car.... AKA Happy Father's Day

My goals for Father's Day this year were pretty simple: wash Evan's car and make him waffles with a Waffle Love copycat recipe {popular food truck around these parts}. Nothing extravagant, just keeping it real. Here's how it went: 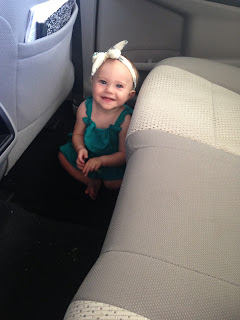 Evan drove his car to work so I load the kids in my car, drive to his office, take out the car seats and reinstall them in Evans car and then reload the kids and drive home so we could wash his car. I forgot to buckle Cosette's seat in properly and I hear her giggle as her car seat tips over. Pull over and buckle her car seat in for real this time. Drive the rest of the way home. Get the kids out of the car and take out the car seats as well so we can get everything cleaned. Set up a play mat on the grass with toys for Cosette. Go and find the bucket, car washing soap, and sponges. Winston will not get out of the car unless I turn on the High School Musical soundtrack and blast it from my phone. Hope the neighbors don't mind. Now go and find the hose. Winston sees the water and asks if he can swim in his pool while we wash Dad's car. Good idea I think to myself and go get the inflatable kiddie pool from the back porch. I re inflate it because duh it's got a hole and then fill up the pool with water and tell him to go play. Next I Pour some soap in the bucket and fill it up with water. Turn around to see Cosette crawling over to the pool. Undress Cosette so she can swim too. Turn back around and see that Winston has dumped out the entire bucket of unused soap and water for the car, refill the bucket with soap and water and discuss the reasons we can't tip it over yet because we are using it to wash the car. Go back and slather Cosette in sunscreen. Turn around and find Winston very enthusiastically scooping up bubbles and washing the hood of Evans car with a metal garden spade. Take away the spade and hand him a sponge. Discuss why we can't wash cars with shovels. Wash the hood of Evan's car. It's getting really hot so I go inside to change into some shorts and grab a sun hat for Cosette. Come back outside, Cosette is getting fussy so I bring her some toys. Go and wash the driver side door of Evans car. Now she is screaming and wants to get out of the pool. Winston has decided to swim in the bucket of soapy water instead of the pool, he's stuck inside it and drenched. Help him out then take Cosette inside naked and can't find a towel anywhere. Finally dig one out of the laundry basket that had been waiting to be folded for days {weeks?}. Dry her off put on a diaper and put her in bed for a nap. Come back outside and Winston has disappeared. Walk around the house to find him shooting baskets in the back yard. He never got in the pool he asked to swim in and now says he's all done. Leave him shooting baskets and go back and wash the rest of the drivers side of the car. Go back inside to make sure Cosette stopped screaming and really fell asleep. Wash the passenger door and wheel of the car. Go to the backyard to check on Winston again. He's still alive and not bleeding either. Success. Wash the rest of the car. Winston comes back and wants to go inside. I let him play in the car while I dry it off and spot clean. Pull the car into the garage so we can detail the interior without melting in the sun. Wipe down the dashboard while Winston finds spare gift cards and bends them in half. Take away the mailbox key that Winston is trying to shove in the cigarette lighter (why do we still have those in cars?) Finish wiping down the interior windows. Now he's hungry and wants marshmallows. Go inside and feed him lunch (not marshmallows) and then read him a book and put him down for a nap. Mistakenly think I might got to rest too. Cosette wakes up and is ready to play, go back out to the garage and let her crawl around in the backseat while I vacuum the rest of the car. She eats a handout from Evan's  in-service she found in the seat pocket. Pull the paper remains out of her mouth, ask myself for the one millionth time why the h-e-double-hockey-sticks I didn't just drive through a car wash and mentally downgrade the Waffle Love recipe for tomorrow to just. regular. waffles. 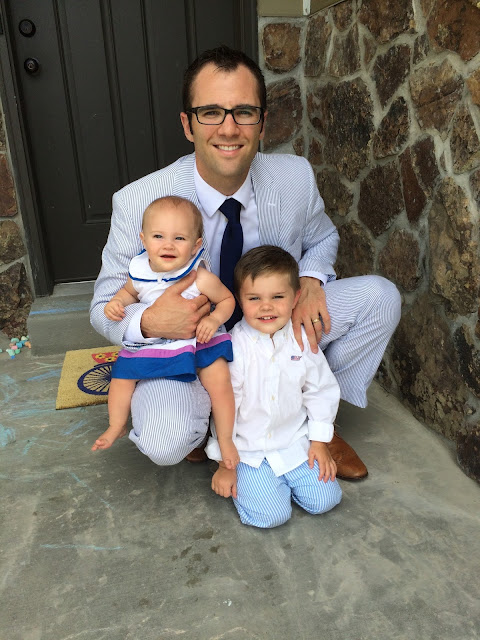