Back in 1867 Brigham Young needed Abraham Owen Smoot {a founder of BYU} to go settle new land, so he told him:

"There are three places all on a par, one is as good as the other. They are Provo, Hell, or Texas. You can take your choice."

Haha! Thanks Brother Brigham.  Texas and Provo have each suited me quite fine which makes me a little nervous about my eternal salvation but what can you do? We're glad Abraham picked Provo because we sure love our college town. In fact, I think I like homecoming even more as an alumni than I did as a student. We had the very best week reliving our "glory days" and bringing our children along to ensure they are thoroughly brainwashed.

Monday we joined the Light the Y hike. Did you know the Y on Y Mountain is the largest college logo in the world? Pretty cool! So back in 1906 the senior and junior classes of BYU were in a duel. The junior class marked up the mountain with '07 to jab at the seniors who then took if down and branded it with their own class '06. The president of the university wanted to put an end to the fight so he decided they would put the unifying name of the school up in the mountain instead- BYU. They had the engineering students map it out so that it would look proportionate from down on campus. After the exhausting efforts of hauling up rock, cement, paint,  etc a mile up the steep mountain they realized they had severely underestimated the time this project would take. Eventually the Y was completed but it took so long that the B and the U were abandoned  and Y Mountain was born. Lighting the Y is a long standing tradition and I don't know how I've missed it for so many years as it is one of my favorite hikes! We strapped on our packs and met the cousins for the celebration. Winston was just gleeful sitting up on that mountain dancing to music and watching for Cosmo. We got to screw in one of the light bulbs and then we all hiked down with our flashlights for donuts and hot chocolate. Really the whole experience was pretty dreamy. 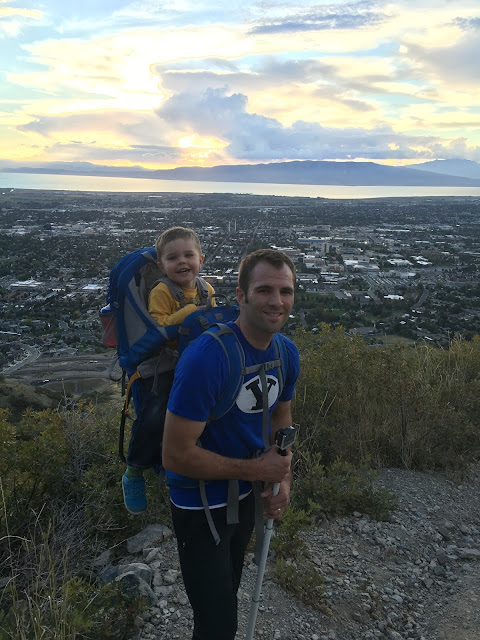 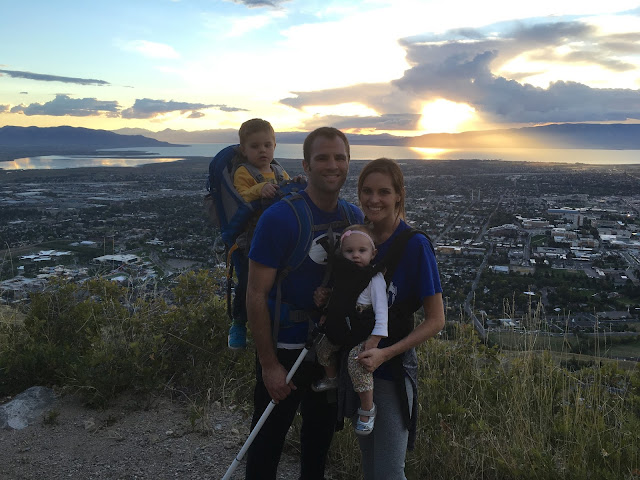 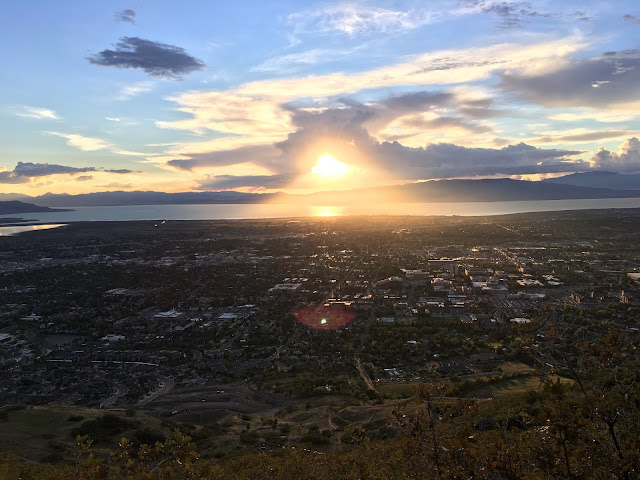 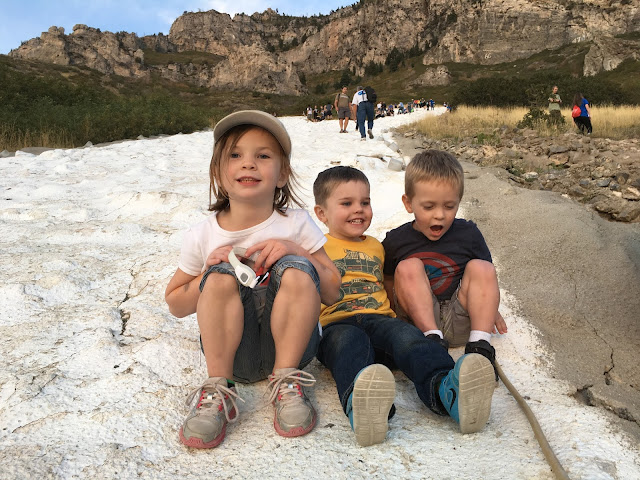 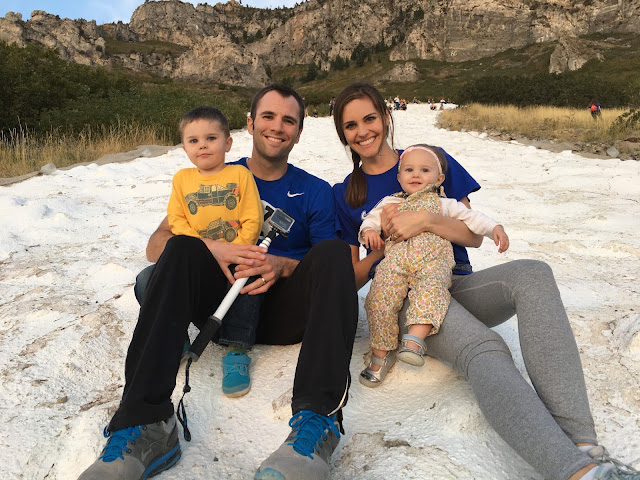 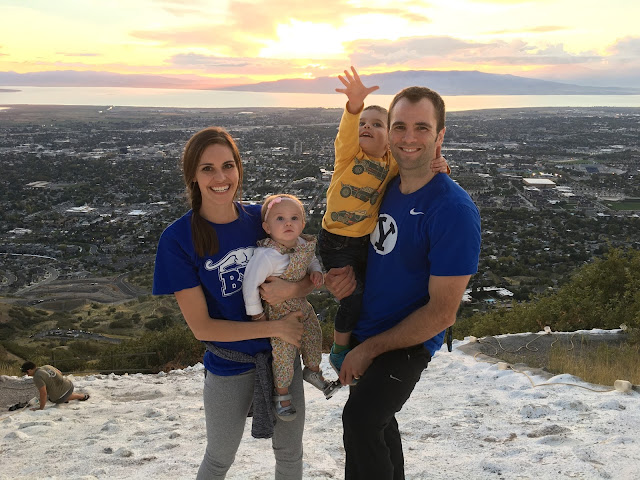 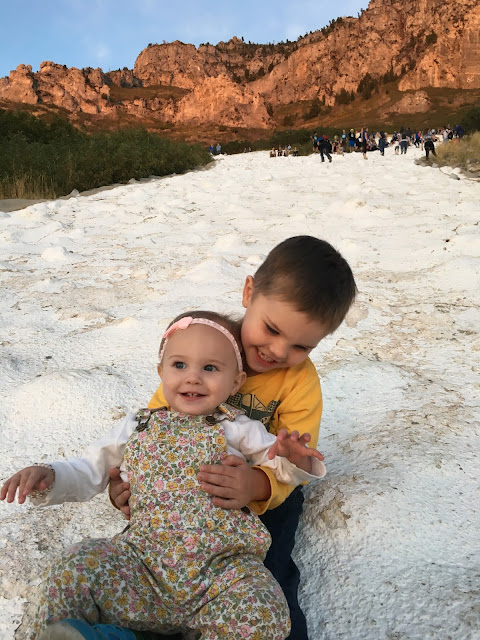 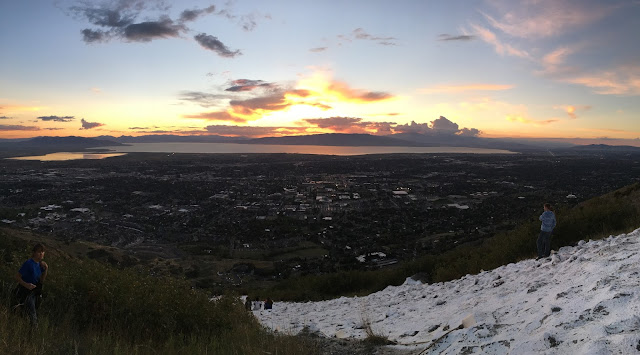 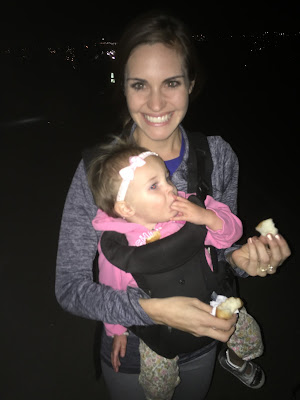 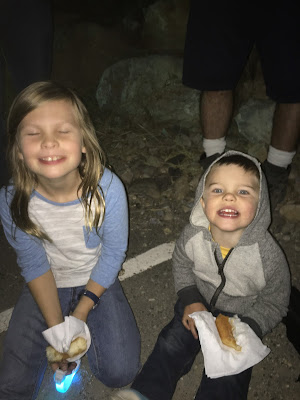 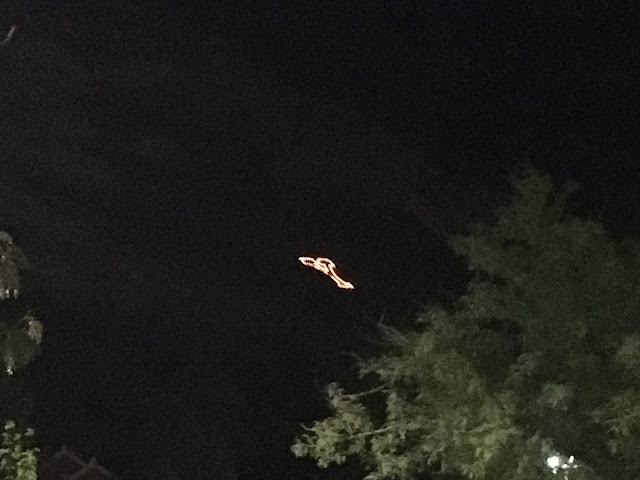 Thursday I got an unexpected text from Heath asking if she could babysit our kids that night so Evan and I could go to the Homecoming Spectacular featuring David Archuleta- um yes!! So funny story David Archhuleta is good friends with our good friend Chad Truman in Nashville (Evans old roommate from BYU). David needed his haircut here in Provo this week so Chad gave him heathers number and he went over to her apartment and she did his hair! He gave her two tickets to the concert as a thank you and she asked a date but he was busy so she let us fill the seats. She's the best! We felt kind of weird sitting front and center with all of David's peeps but we played up our connection to the Trumans as much as possible and hopefully smoothed things over... I mean they did play at our wedding after all. The concert was incredible, the level of talent at BYU is pretty unbelievable and it was basically like a Broadway show, a real treat. 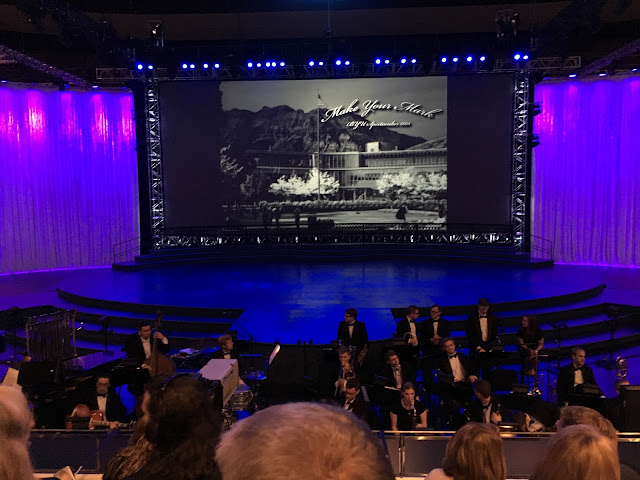 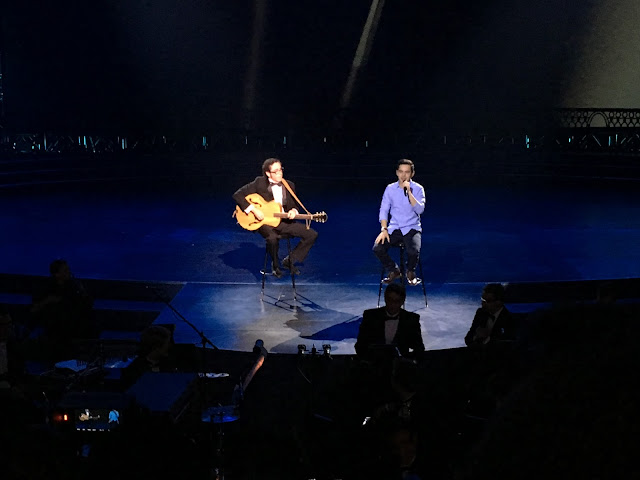 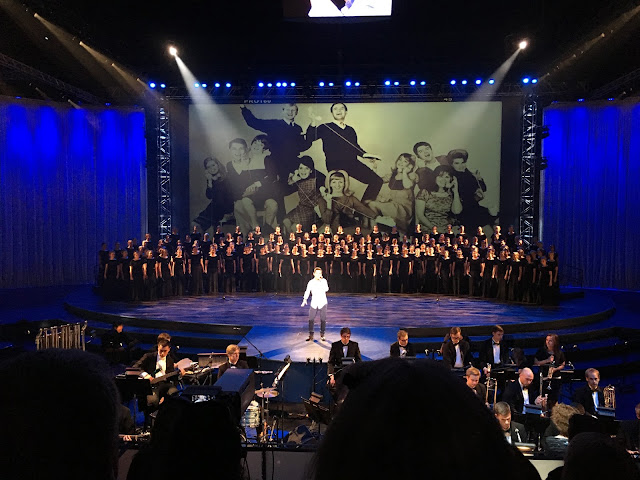 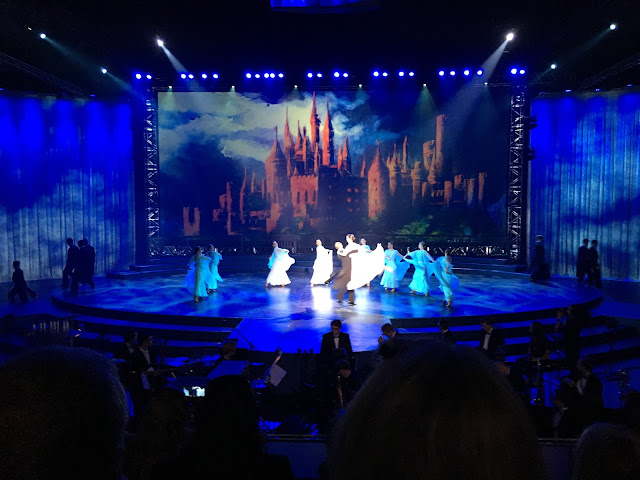 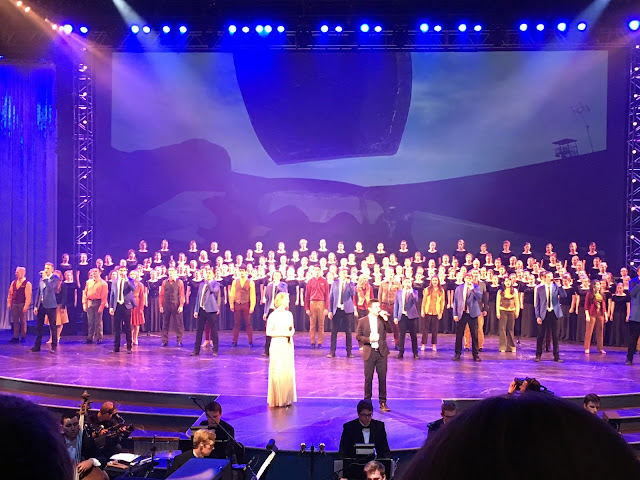 Saturday I signed Winston up for the 200 meter Cougar Run and I was SO excited about it. Literally clicking submit on his online registry brought me this giddy smile ha! He was not as excited as mom but he ran those 200 meters as best he could especially thanks to Claire for encouraging him on with promises of blue pancakes at the end. 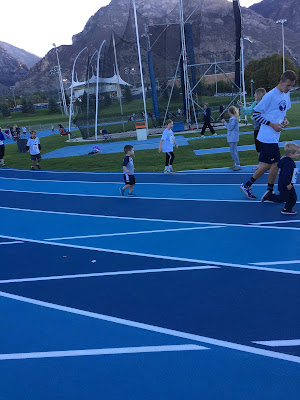 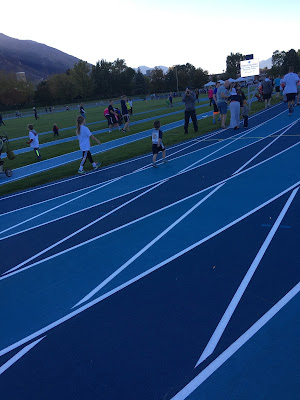 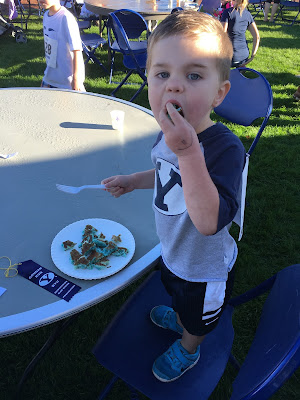 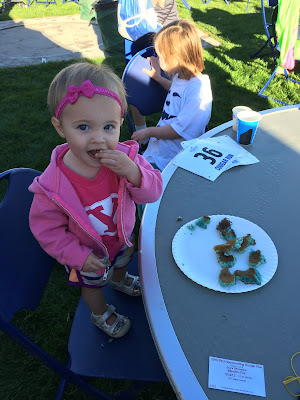 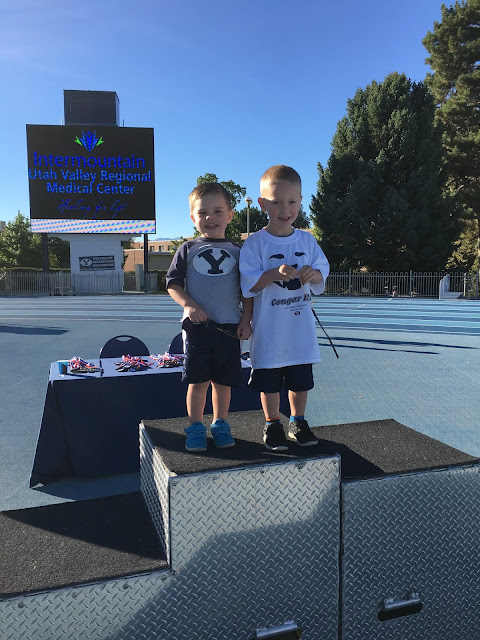 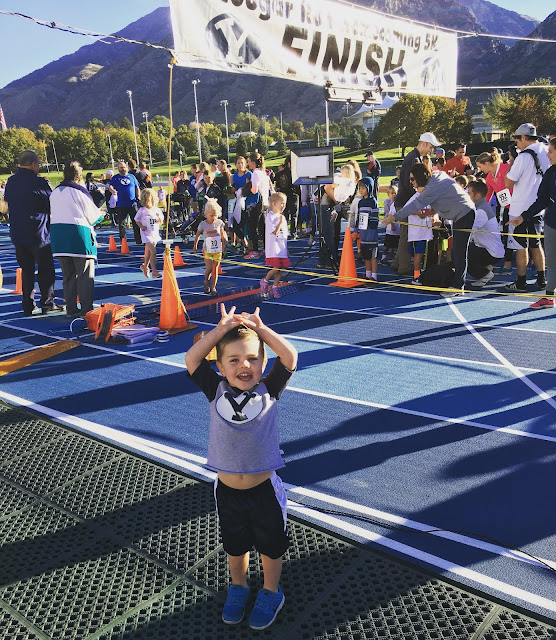 We finished off the festivities at the homecoming parade where my babies stuffed their faces with candy and sang the fight song with the band and waved to their favorite celebrities Uncle Christian and Aunt Jessica on the Accounting Club float. 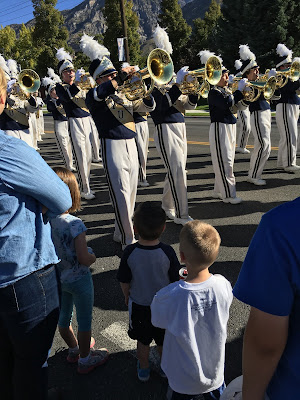 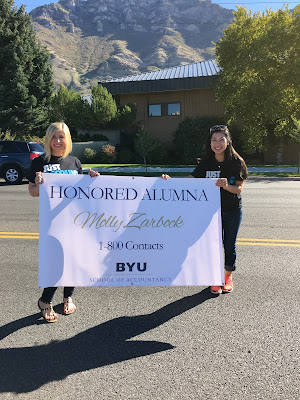 Did I mention I love this school? This whole week has made my heart swell with pride for all the good BYU does in the world and makes me feel so honored to be a cougar! Maybe I'll even answer the phone one of these times when they call me asking for donations... Well....Maybe...